Villa in France, One Peculiar Owner

Recently I was chatting with Chad Bowser — Call of Cthulhu writer extraordinare, inventor of Cthulhu Invictus, and sometimes collaborator on Cthulhu Reborn projects. Chad was bemoaning the fact that despite the fact that the recent Chaosium update of Horror on the Orient Express is an absolutely super-deluxe reimagining of the 90’s classic, most of the handouts didn’t get much revamping or update. Having recently (finally) found time to read through my own HotOE box, I’d have to say I agree.

One specific problem that Chad’s group had run into was the fact that while in the Paris chapter of the campaign (“Les Fleurs du Mal”) they had fixated slightly on the 17th Century Villa constructed by the Comte Fenalique. Investigators researching this can readily turn up the floorplans to this unusual building … but sadly it isn’t included as a handout. Chad asked me if I had any way of putting together a semi-realistic looking old document bearing the floorplan of a French Villa in Poissy. Here’s what I came up with: 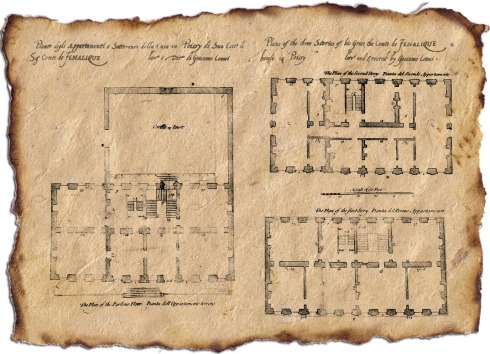 After sketching it out I thought maybe it should be a bit more beaten and weathered-looking, so I roughened and aged it some more: 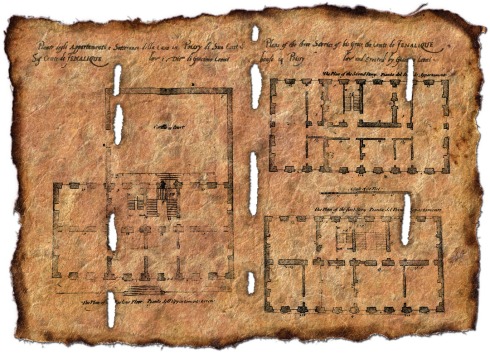 If you’d like to use this image as a handout to enhance your games of Horror on the Orient Express (1st or 2nd Edition) … feel free! Equally, if you want to remix it into some other prop of your own creation, that’s also cool with me. If you get a visit in the night from a shadowy  fiend, though, it’s not MY fault … 🙂

EDIT: For those who want the floorplan image minus background texture, here it is … (click for the full resolution version)

This entry was posted on Thursday, April 14th, 2016 at 2:26 am and posted in Cthulhu Game Aids, Prop Elements. You can follow any responses to this entry through the RSS 2.0 feed.
« Terror From Down Under (Coming Soon)
Convicts Being Released Soon »

8 responses to “Villa in France, One Peculiar Owner”