Welcome to a New Year of Horrors

Happy New Year from all of us here at Cthulhu Reborn! May 2016 bring you all the horrors you wish …

I thought that it would be a great idea to kick off the new year in style by releasing something that’s been sitting around on our hard disks for a while gathering dust — a customised 7th Edition character sheet, skinned with a “Masks of Nyarlathotep” theme. 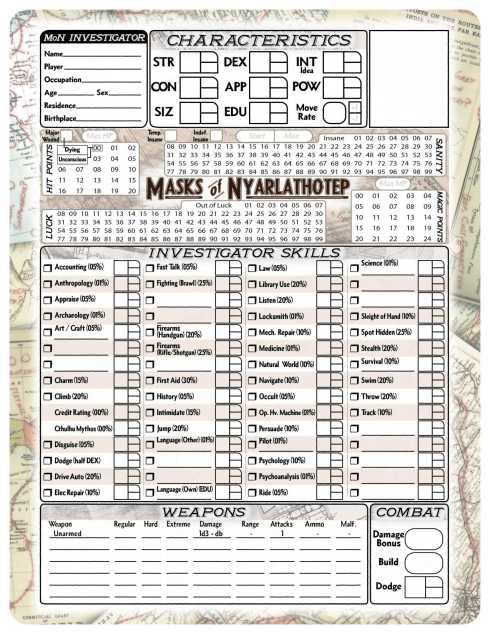 Where did this come from? Well … a bit over a year ago I was contacted by Ben Patey, whose ill-fated Kickstarter to create a physical prop set for Masks has been well documented over on YSDC and other blogs (so I won’t rehash its tale of woe here). Ben wanted to have a special “Masks of Nyarlathotep” character sheet designed as a reward to go along with the props. He had previously run an online poll to see whether people wanted a sheet aimed at the older (6th) edition of the rules, or the new (7th) edition — most people wanted the latter, hence this sheet was born.

I believe that some physical character sheets were produced and included along with the prop sets for the small number of backers who have received them. Since there is no current time-line on when any of the other backers (of which I myself am one) will be getting their props, I thought I would go ahead and release these sheets as free downloads for backers of Ben’s Kickstarter and anyone else who might like a Masks themed character sheet. You can grab the sheet either as a pair of high-resolution PNG images (front and back, 300 DPI colour) or you can download the PDF version which has the same autocalc logic as the official Chaosium 7th Edition character sheets.

Like all the official CoC 7th Edition PDF sheets, this one will probably only work properly when opened with Adobe’s free PDF Reader or with Adobe Acrobat. It uses a whole bunch of dynamic mojo that most PDF software doesn’t support.

As with every free download provided here on Cthulhu Reborn, this sheet is released under a Creative Commons Attribution license — that means you can do pretty much anything you like with these files, as long as it is not for commercial purposes. I hope folks find this a useful addition to their collection of Call of Cthulhu 7th Edition character sheets 🙂