The Economics of Free

As regular readers of this blog would know, Cthulhu Reborn has a long history of providing professional-quality Lovecraftian game stuff either for free or almost for free. It’s the reason the blog was founded after all.

Over the years our ambitions have expanded from purely brushing up pre-existing public domain scenarios to creating brand new material and even new settings. That’s been highly successful, and lots of people have picked up our PDFs and printed books. But there has always been a fundamental thing that’s constrained us — namely, the desire to pay writers and artists a fair rate for their original work even when the product we’re creating is free. This is something we’ve tried tackling in different ways over the years.

Our latest experiment in funding free content is Dateline: Lovecraft, which we’ve spruiked several times here on the blog already. The “business model” behind this is that of a core product which people need to buy, coupled with an expanding range of free add-ons that enhance the usefulness of the core, all funded by the sales of the core product. The basic idea is that all profits from the original Dateline: Lovecraft sales will go back to commissioning writers and artists for the freebies. As an example, we’ve already released the first of the free add-ons.

Now, it may seem to the average gamer that having a paid product for sale on DrivethruRPG and RPGNow is a license to print money, but as anyone who’s tried publishing things for themselves will know the revenue from selling game books isn’t necessarily as huge as you’d think. This is especially true when you consider the cut that retailers take from the cover price, and also the cost of producing the books in the first place.

While most people don’t share much information about the financial side of their publication efforts (or Kickstarter fulfillments for that matter), the unique nature of the Dateline: Lovecraft “experiment” makes me think that it’s only fair to disclose some of those details here.

The production budget for commissioning work on the core Dateline: Lovecraft product and its first freebie was about US$410 — that’s the cost of paying Jo a fair rate for her excellent writing in the add-on scenario and the cost of a couple of awesome illustrations from Reuben. The many, many hours that went into creating the Dateline: Lovecraft newspaper prop itself and also the rest of the writing, illustration, and layout work that went into pulling the PDFs together is somewhat of an internal cost (i.e., Cthulhu Reborn did the work itself rather than paying real money for it). We’re not seeking to pay ourselves for any of that.

However, even with that fairly modest external production cost, the core Dateline: Lovecraft product still needs to sell somewhere between 45 and 55 copies to break even. Each freebie add-on will likely cost a similar amount in terms of production cost, so realistically we will be be in a position to release the second freebie once we’ve sold around 100 copies of the core product. Of course, the fact that some people chip in a small contribution in return for the Pay-What-You-Want add-on PDFs certainly helps nudge that along, but realistically most of the revenue will need to come from sales of the core product.

In the couple of weeks since Dateline: Lovecraft was released, we’ve earned enough from sales of the core and PWYW contributions to have hit the “break-even” mark. That is, we’ve now earned back what it cost us to make the items we’ve released. So, profits from here on are now going towards funding the second freebie PDF. Overall we’ve been pretty happy with the rate at which our product has been selling … but obviously we’d be even happier if the PDFs were flying off the shelf. Realistically, it is a very competitive market — there are a lot of great new products being released, especially in the Lovecraftian RPG world — so we’re happy to attract whatever discerning buyers we can. 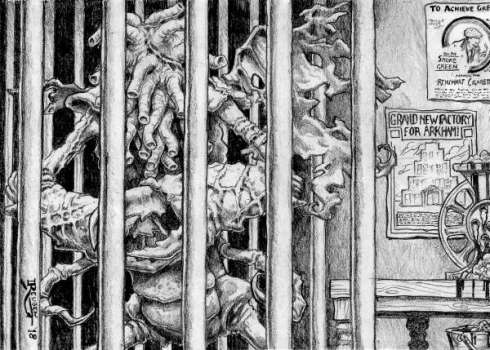 Speaking of the second freebie scenario add-on, I can also reveal some details of what this product will look like. The scenario will be called “Smoke Green” and be written by Noah Lloyd (of https://reckoningofthedead.com fame). It’ll be about 8,000 words. The all-new illustration for this scenario is an awesome piece by Reuben Dodd, shown above. And yes that is a beaten-up Mi-go in a cage. What’s it doing there? We will have to wait until the scenario add-on (hopefully) gets funded!

In the meantime, if you want to help us along by spreading the word about Dateline: Lovecraft to folks who you think might potentially want to own a copy, we would certainly appreciate it. In the meantime … I guess we’d better get back to mistreating that Mi-go …

Convicts Need Any Luck They Can Find

Today we are pleased to announce the release of our 13th “Ticket of Leave” supplement for Convicts & Cthulhu. Entitled, “The Thirteenth Convict” the 27-page PDF is available right now here on the Cthulhu Reborn blog. This supplement was originally supposed to be released in late August, but competing demands and limited time has forced its delay. We apologize to C&C fans who’ve been waiting for a few months for new ways to inflict woe upon their convict investigators 🙂

The subject matter for this “Ticket of Leave” is superstitions and ‘folk magic’ of the early Australian colonial settlements — a topic suggested by one of our readers (based on some interesting news articles about recent discoveries shedding light on the beliefs of early colonists). It is a fertile area to explore for a Lovecraftian setting: HPL himself was not above taking folk traditions of colonial America (in particular beliefs in witchcraft) and riffing on them to create some new Mythos-fuelled horrors. The superstitions of early Australia, while they share similar roots, have their own quirks and idiosyncrasies which lend a different flavour.

As well as providing some general notes on superstitions and “good luck” practices of colonists, this supplement also includes a full-length scenario (or mini-campaign outline, really) based on the curious phenomenon of concealed objects. There is a growing body of historical evidence to suggest that it was not uncommon practice for early colonists to embed mundane objects into the walls of homes during their construction as a kind of protective ward. In some cases these were simple charms written on paper, or common objects like boots. In other cases these were more outlandish, like the practice of embedding a dead cat in the wall to symbolically “chase away” any stray malign spirits that might try to enter.

Of course in the context of Cthulhu Mythos horrors, the notion of things being concealed in the walls of the family home lends itself to more destructive and terrifying possibilities, as explored by the scenario “The Thirteenth Convict.” Investigators are summoned to the site of a farmhouse in a remote corner of the colony, where death and calamity seems to have visited in the form of a great force that seems to have burst forth from within the wall. A few days later, a remarkably similar incident destroys a second farmstead — in a far-distant settled region.

What, if anything, do these strange calamities have to do with the odd, black-robed Frenchman who has recently arrived in Sydney? And why has the itinerant minister who tends to the spiritual needs of both settlers and convicts in these remote localities mysteriously disappeared? Unless the investigators can get to the bottom of these unprecedented happenings, the number of those killed or sent mad will surely soar … and as disasters multiply, a cruel plot to sow discord through the forces of Outer Gods begins to unfold. Who is the Thirteenth Convict and why does his (or her) future matter so much to the shadowy forces casting terror across all corners of colonial New South Wales?

Ticket of Leave #13: The Thirteenth Convict is available right now as a free 27-page PDF download. The version linked here is complete with game statistics for the Call of Cthulhu, 7th Edition (under Chaosium’s fan license). As with other recent releases, we have been obliged by fine print in Chaosium’s license to also create a stat-free version of the supplement for distribution via RPGNow and DrivethruRPG. That version will go on-sale as a “Pay-What-You-Want” title in a day or so. We trust that this supplement about all things superstitious will bring you and your gaming group good fortune as you plumb the dark depths of the worst that the Cthulhu Mythos can throw at humanity (that insignificant upstart species!).

If you love this free download so much that you feel offended by the fact that you haven’t paid money for it (and yes, believe it or not people have said that us) … you can always head over to our brand new “donations” page. There’s no obligation, though — honestly, we’re thankful for the continued support we receive from our loyal readership that downloads (and plays!) our gaming supplements. Long may the cruel tyranny of Convicts & Cthulhu flourish, and the sharing horror just helps is spread!

The month of October is synonymous with horror, especially in the gaming world (which seems to have taken Halloween and spread its evil taint across an entire 31 days).

To celebrate all things horrific, we’ve decided to offer our recently-released Dateline: Lovecraft core product at 20% off for the whole of October. If you’ve been tempted to pitch in to buy our newspaper but aren’t sure, maybe a few [[insert-local-currency-units]] off will make it appealing to you! Of course the awesome free add-on scenario by Jo Kreil is still … free :).

As mentioned previously, we are also putting the finishing touches on our next Convicts & Cthulhu “Ticket of Leave” supplement, featuring new artwork by the ever-horrific Reuben Dodd (see above). This will be our 13th C&C supplement, and we decided it would be neat to theme it to be about superstitions and folk magic in early Australia. Of course, not long after making that decision … mysterious and unexplained things kept happening … which have delayed the release of this supplement, which was originally due in late August!

And of course Spooky October is about much more than Cthulhu Reborn. We would strongly urge you to check out what other great gaming publishers are doing to celebrate gaming’s most fake-cobwebbiest of months. Over on the Sentinel Hill Press blog, plucky cemetery-explorer Bret Kramer has kicked off a series of Grave-themed articles called “Grave-tober”.

Something else that has excited us is Pelgrane Press’ imminent release of Hideous Creatures, a massive 352-page hardback book which revises and greatly expands Mythos creature writeups by Ken Hite previously only available as part of KWAS subscription bundles. The reason this forthcoming release is especially near and dear to us at Cthulhu Reborn is that the new book adds a treasure-trove of in-world “handout-style” documents relating to each of the nasties described in the book … and Pelgrane asked yours truly to design those pieces. That all adds up to 31 weird handwritten, typewritten, or newspaper-published pieces of 1930s goodness, collectively sprawling across about 50 pages of the book. On top of that I also did layout for this behemoth of a book, and designed the title logo you can see splashed in lurid green across the cover.

Pelgrane have just listed Hideous Creatures as available for pre-order on their website.