From Russia With Menace

This post is perhaps a bit left-field for Cthulhu Reborn, but I figure that if there’s one thing that every reader of this blog wouldn’t mind hearing more about … it’s free stuff that can potentially be useful in enhancing Lovecraftian tabletop RPG sessions.

So, in the spirit of sharing links to (potentially) useful freebie things, I’m going to talk for a bit about a source for limitless FREE (and good) Dark Ambient music. Now I know the idea of using spooky or atmospheric music to “set the tone” for a gaming session is certainly nothing new. I have read lots of posts on forums over the years with recommendations for movie soundtracks and the like which would make great backdrops to a Cthulhu game gathering. Heck, there have even been a few commercial CDs specifically put out to accompany Call of Cthulhu and Trail of Cthulhu books.

Over the years I’ve tracked down loads of excellent CDs and MP3s from artists in the curious musical sub-genre called “Dark Ambient” — it’s that sort of intersection of minimalistic background sounds with drony hypnotic sounds and general disturbing spookiness. I was even remarkably fortunate enough last year to see one of the geniuses of this style of music — Lustmord — perform live [here’s a snippet of his live show on YouTube].

Anyway … up until recently, my collection of Dark Ambient music has been limited to what I could easily track down (and buy). But then, by chance I stumbled upon the existence of an incredible resource: a net-label called “GV Sound”. Now a net-label, for those who haven’t run into one before, is a kind of record label that exists only online and (usually) releases stuff for free. They are usually themed around a musical style or collection of styles, and the label adds value by only releasing things that are .. well up to their standards. So, grabbing music from one of these labels is much less hit-or-miss than just randomly downloading an MP3 released independently by “some random guy or girl”. But it’s still free music.

I don’t really know much about the “GV Sound” net-label except what it says on their website: “GV Sound Netlabel is open to Dark Ambient, Drone, Noise, Ambient Music.
We provide free distribution of independent Music under Creative Commons License with free dowloads.” The label seems to be based in either Russia or Ukraine, and a lot of the music it releases also seems to come from that part of the world, and has been releasing free music at a rapdily-increasing pace since 2011. At the time I write this they’ve clocked up 294 releases totalling over 2200 files (a little of 11 DAYS of music, of varying types of darkish ambientness). If this sounds like your sort of thing, I would very much suggest scooting over to the Internet Archive (archive.org) which collects most of the GV Sound releases on this page. You can download ZIP versions of entire albums, or listen to the music online using an in-browser player supplied by archive.org. If you just want to a quick sample of what this is about, maybe this page would give you a taste of what this label is all about. The same music is also available on other music sharing sites like Bandcamp. I’ve listened to just a fraction of what’s available for free … but I’m very impressed with the general quality. Releases vary in style across everything from pure drones to spooky piano pieces to noisy and disturbing soundscapes. Lots of it could be suitable for use in Lovecraftian games. Some of the track titles (at least the ones that aren’t in Cyrillic letters) seem to hint at Cthulhu-related inspiration to some of the music, too.

One of the more remarkable of the GV Sound releases was a compilation of different forms of Ambient music they put out to celebrate the numerologically signiciant date 11 November 2011 (11/11/11). This compilation runs for … well 24 hours, covering the entire day in 11 minute chunks. The “Light Side” half consists of 56 tracks and the “Night Side” half has 70. Quite an achievement.

On a related (but not quite freebie) note … I should also give a mention to another Cthulhu-related ambient musical artist, who has also released some great music intended to be either a background soundtrack to Lovecraftian games or just music to listen to while you read HPL’s fiction. The music is released under the name Seesar, and here’s a link to my favourite of his (their?) releases on Bandcamp.

So … I guess there’s no reason NOT to try to scare the bejeebus out of your players next time you gather together (in a darkened room) to roll the dice to save the world from the Great Old Ones. Save it for another week, anyway 🙂

Nobody Wants A Hungry Shoggoth!

Yes, that’s right. Finally, the world will be uniting to FEED THE SHOGGOTH. Finally a cause that we can ALL get behind. 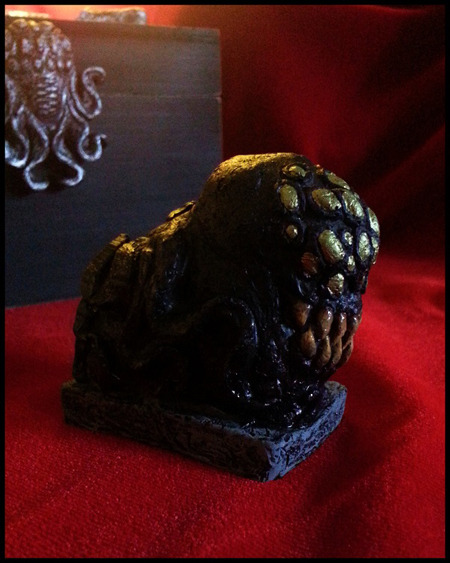 For many years scientists world-wide have slaved in vain, pouring coloured liquids from one test tube to another, in an effort to finally once and for all find the solution to ending global Shoggoth hunger. And now, finally, somebody is doing something about it! More power to you, Mr McInnes!

Or … maybe I am reading FAR TOO MUCH into Badger’s Kickstarter, launched today: 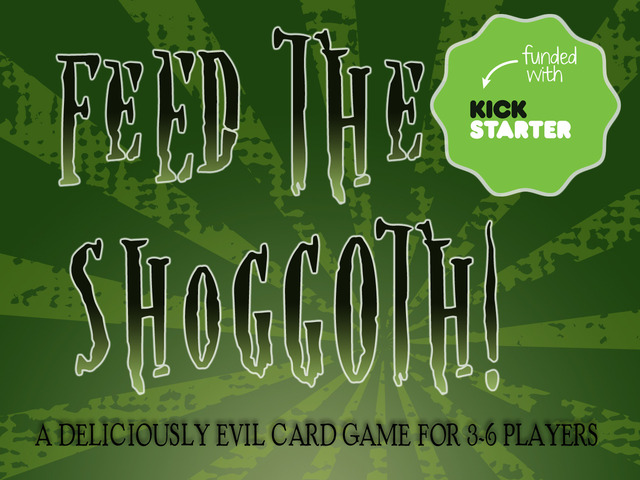 Either way … I would highly recommend anyone who is EITHER interested in high quality Cthulhu-themed card games OR interested in ensuring Shoggoths everywhere don’t need to go to sleep hungry tonight, check out Badger’s most excellent Kickstarter campaign. Some of the rewards at higher backing tiers look especially awesome, and unlike several other recent KS campaigns which I have opted out of, non-US postage is not insanely over the top!

Also … in related news … the inestimable Mr McInnes has just recently posted on his blog some neat details of the design work he did for Chaosium’s Call of Cthulhu 7th Edition rules. If you have an interest in gaining an insight into the many, MANY little design decisions that go into producing a beautiful layout for a game book, you could do far worse than check out Badger’s blog.

That’s me, signing out … back to feed my pair of Welsh Highland Shoggoths before taking them on a walk to the albino penguin pits!