Expedition to the Blue Mountain Peaks

It’s only just over a month since we released the previous title in out Convicts & Cthulhu line … but we find ourselves again today quite breathless with excitement, announcing the release of Tickets of Leave #12: Fallen Stars. This PDF is an exciting release for us, since it brings a brand new writer into the C&C production team, long-time historical RPGer Matthew Ruane (who has a long relationship with Colonial-era Lovecraftian RPGs having run many of the convention previews for Sixtystone Press’ excellent-but-sady-still-forthcoming Colonial Lovecraft Country line).

Matthew’s Ticket of Leave weighs in at a respectable 22 pages, and is available for download right now, absolutely free! The format for this supplement is a little more like a traditional convention scenario — which is not surprising, because a version of this scenario will be run at GenCon 2018 in August as our official C&C scenario for the convention. So, if you are already booked into playing on one of the runs of this game in Indy, you may want to hold off reading this Ticket of Leave straight away (or do so with your spoiler-sensitive sunglasses on). 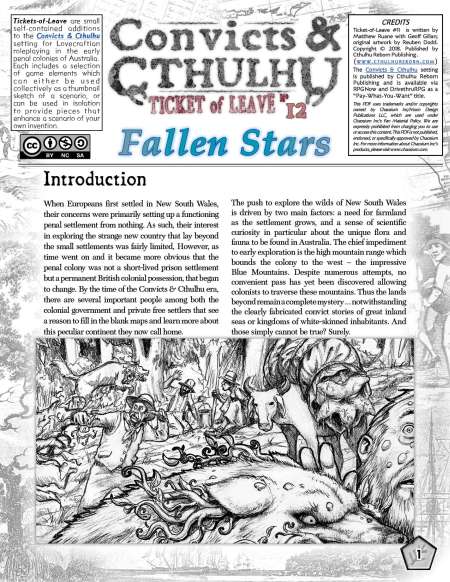 The historical subject matter for Ticket of Leave #12 draws on two related strands important to life in the early penal colony of New South Wales. One of those is the growing need to find new farmland to house and feed the growing settlement, an ambition significantly hampered by the tall slopes of the Blue Mountains bordering the western edge of the colony. Despite several efforts by determined explorers, there is still no known path through this vast natural barrier (at least, Europeans know of no such path — Aboriginal peoples actually had two well-established “highways” to traverse the mountains). The other facet of colonial life explored in this supplement is the inquisitive scientific elite who look upon the strange and vastly unfamiliar flora and fauna of the new continent of Australia and see great new opportunities to expand humanity’s knowledge. And every reader of Lovecraftian fiction knows that expanding the limits of human knowledge *always* works out well …

In this scenario, the Investigators are invited (or obliged) to join an expedition to the remote foothills of the Blue Mountains where, some nights prior, a fiery ball of rock fell from the sky — a “falling star.” Several members of the colonial administration see the opportunity to collect specimens from this scientific oddity as an offer too good to pass up. But, few white men have ever penetrated this far into the hinterland, and the maps of the region are more akin to blank leaves of paper with a few stray scratchings. Thus, the expedition calls for hardy and fearless souls who can survive on their own in the wild bushland … and who knows, somewhere along the way they may even stumble upon the much-sought-after pass through the vertiginous Blue Mountains. Or they may find something (or be *found by* something) far stranger altogether … 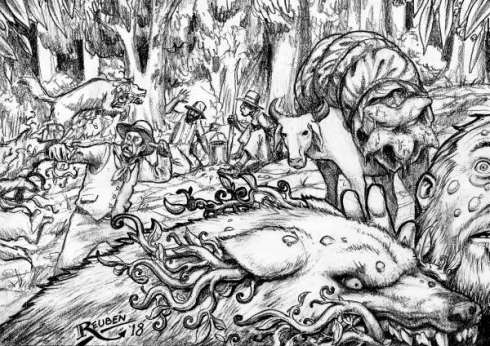 Ticket of Leave #12: Fallen Stars by Matthew Ruane (with some minor historical sidebars by Geoff Gillan) is available right now as a free download from the Cthulhu Reborn blog. The version linked here is complete with game statistics for the Call of Cthulhu, 7th Edition (under Chaosium’s fan license). As with other recent releases, we have been obliged by Chaosium’s somewhat arbitrary licensing rules to also create a stat-free version of the supplement for release via RPGNow and DrivethruRPG. We would encourage you to share the links to either or both of these versions with your personal network of Lovecraftian RPG enthusiasts. The more free stuff out there in the wild, the better for everyone!

This release also brings us back into our regular bi-monthly schedule of releases (after April’s release being delayed); so from here we’re aiming for another Ticket around GenCon time, one around Halloween, and maybe even a third Convict Christmas-themed supplement.

As a final note, I would really like to express my thanks to Matthew Ruane, our all-new Convicts & Cthulhu writer. In producing this product line we strive for a very high level of historical accuracy — sometimes creating a whole bunch of work for ourselves just to present the Colonial Australian setting in all its grim and gritty (and horrific) detail. Matthew has embraced this obsessive mania for historical verisimilitude and run with it … and the result of his research is a fine, if rather sanity-sapping, adventure which showcases everything we love about Convicts & Cthulhu. So, well done, Matthew … but if all the GenCon groups end up going hideously insane before completing the scenario, we wouldn’t be at all surprised 🙂

It doesn’t seem all that long ago that we were were announcing the release of our eleventh Ticket of Leave supplement for Convicts & Cthulhu … but, strike me down, we are about to put out another one!

Ticket of Leave #12: Fallen Stars should be out before the end of the month, neatly bringing us back into our normal bi-monthly series of PDF releases. This supplement is especially exciting for a couple of reasons: firstly, it is written by a brand new writer to the C&C line, Matthew Ruane. And secondly, a version of this new scenario will be our official Convicts & Cthulhu game at GenCon 2018 in August (something we’ve never done before!)

So keep your eyes peeled here, and hopefully we will be announcing the release in the next couple of days! In the meantime, you can enjoy the wonderful new Reuben Dodd artwork that we’ve commissioned for ToL #12. This scene highlights the fact that not all trips out into the wild bushland of NSW are as uneventful as one might like.

We’ve been quite excited here at Cthulhu Reborn HQ, watching our friends at Stygian Fox bring home their successful Kickstarter to republish the wonderful “New Tales of the Miskatonic Valley” (first released in 2008 by the much-missed Miskatonic River Press). It will be great to see these scenarios back in print … and we will also have the privilege of contributing a few pages of Miskatonic-related newspaper pages to the back of the book. Yay! (Note: this is distinct from the much larger newspaper-related product, Dateline: Lovecraft, which we’ll be releasing ourselves later this year. So, two batches of Arkham newspaper weirdness!)

And in slightly related news, Cthulhu Reborn are happy to finally reveal the first of eight writers who is currently scribbling away creating scenarios for our forthcoming Post-Apocalypse book. It is none other that frequent Stygian contributor and editor, Jeff Moeller. Most people will probably recognize Jeff from his superlative modern-day scenarios in the ENnie award-winning The Things We Leave Behind. The gritty style of his Lovecraftian writing (so much a breath of fresh air when major publishers seem hell-bent on driving their games relentlessly towards pulp sensibilities) is a great fit for what we’re looking to achieve with APOCTHULHU.

Jeff has already submitted a scenario manuscript for a scenario set in a post-Apocalyptic near future in which the catastrophic “end of the world” predicted by a fringe cult — much lambasted by social and traditional media — actually came to pass. At the appointed time the world actually *did* burn in a fiery maelstrom, Old Testament style. But those who followed the cult’s instructions (even if only as an ironic joke), survived the conflagration and live on in a series of bunkers around the world. These Survivors include the player characters. One year on, and the silence and isolation of the bunker are broken by a strange radio signal … urging them to make a trek across the wasteland, to where the faithful are preparing a FINAL event which will bring an ancient prophecy to its conclusion. But who is behind the message? And is the prophesied birth of the cult’s Messiah really going to save the already shattered world, or damn it forever?

So basically … just some light entertainment for your gaming table 🙂

[Recap of earlier news: APOCTHULHU is an anthology of scenarios, each set in a different version of the world following a “Mythos Apocalypse”. It is written to use a (slightly) tweaked version of the Delta Green RPG rules, but is designed to be readily translated to other d100 systems, should you wish to do so.]