Return of a Great Old One

Scott David Aniolowski is one of those writers who has achieved a bit of a legendary status among those who have a long-time connection to the Call of Cthulhu game. He has a list of writing credits as long as your arm (see below), but like many of the game’s “Great Old Ones” there hasn’t been much in the way of newly-published material from Scott. But, as the famous couplet from Alhazrad goes, “that is not dead, yada yada yada”. And this is proved, today, as Scott launches a Kickstarter campaign for a brand new scenario publication: “Cold Warning” 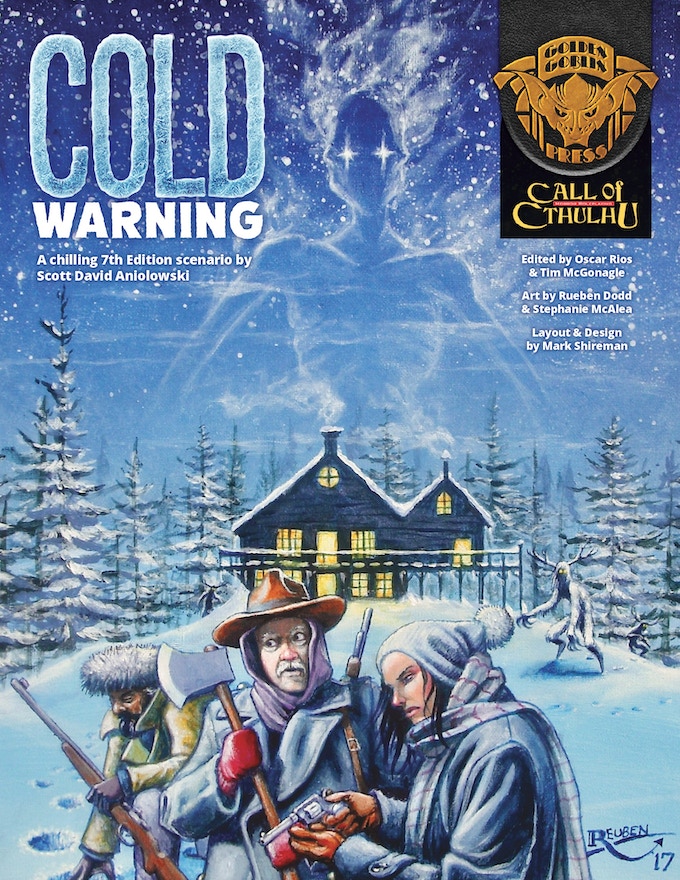 The Kickstarter campaign describes Scott’s scenario as follows: “Cold Warning is a Jazz Era, Call of Cthulhu 7th edition scenario set in Arkham, Massachusetts and Hudson, Maine. What begins with the dubious suicide of Joseph Sutton and the bizarre behavior of his widow Marilyn, leads investigators to Winter Haven, a remote hunting lodge in rural Maine. Here they experience mysterious phenomena, encounter suspicious lodge guests and staff, learn of ancient legends, and confront strange and frightening creatures before finally witnessing the awesome power of a Great Old One.”

It also describes how Cold Warning — a scenario first written by Scott in the 1990s — almost became one of those “lost unpublished gems”, after having been left forgotten in his bottom drawer for decades. The long history of the scenario is discussed by Scott in this interesting 20 minute audio interview with the crew from the MU Podcast. As folks who have also worked to bring some of the more obscure “lost classics” of Lovecraftian roleplaying to printed form, this is exactly the kind of thing we’d like to see more of! So, we would definitely encourage you to check out the Kickstarter page for Cold Warning to see if it’s is to your liking. Another great reason to consider backing the book is because it will feature art from Reuben Dodd (see below), who has also done a bunch of great work for us. We love Reuben’s work — and it will be great to see more of it in print. 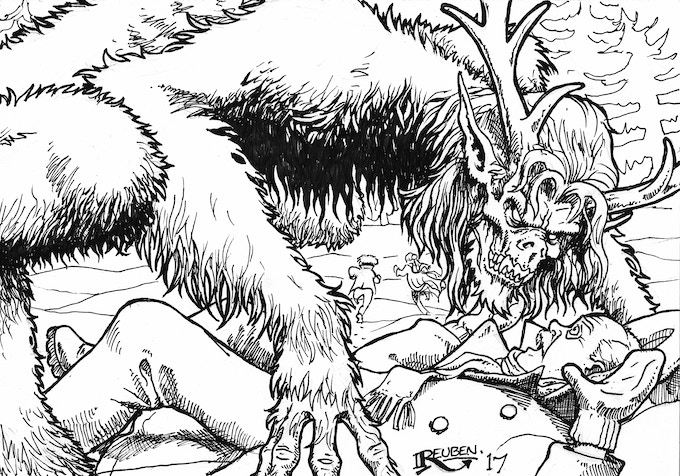 But … don’t wait too long to check this out. Unlike all of Golden Goblin’s prior Kickstarters (which have each run for about a month), this particular campaign only runs for seven days. This is an interesting experiment, and I’m sure that lots of other publishers will be watching closely to see how it goes. In another first for Golden Goblin, this book will be produced solely as Print on Demand — a distribution method already wholeheartedly embraced by a few other publishers such as Stygian Fox (and us!). Hopefully this will do something to avoid the ugly situation that Golden Goblin faced last month with the backlash over international shipping fees for their “7th Edition Cthulhu Invictus” Kickstarter.

Finally … in case you’re not familiar with Scott’s long history with Call of Cthulhu, the photo montage below gives a visual overview of just *some* of the great books to which he has been a core contributor. You can also check out an interview with Scott we ran here on Cthulhu Reborn back in 2013. And if you’ve ever cracked the cover of Malleus Monstrorum, the encyclopedic book providing game statistics for a huge number of Cthulhu Mythos gods and monsters, then you’re well acquainted with Scott’s genius!

We are delighted to announce the release of #4 in our popular series of mini-supplements to the Convicts & Cthulhu setting of Lovecraftian horrors in the early Australian colonies. This release, titled “The Vanishing Ensign” is by far our largest Ticket of Leave supplement — really more of a double-sized release, weigning in at 14 pages of PDF goodness. You can grab it right now from RPGNow. Because it’s a much bigger book than others in the line we’ve decided to make this a “Pay What You Want” title rather than just a simple free PDF. What that means is that if you still want to pick it up for free, you can do so (and that’s fine with us!) but if you would like to chip in a dollar or two as a “thank you” to Cthulhu Reborn, then that avenue is open to you also. Strangely, the number 1 complaint we receive about our free books is that some people wish they could pay for them, as a show of their appreciation I guess. The “Pay What You Want” pricing model is a good way of balancing both … and we will probably use it again if we make more large Tickets of Leave.

So, with all that preparatory stuff out of the way … I guess that just leaves me the task of describing what the heck “Ticket Of Leave #4: The Vanishing Ensign” is all about. At its core this release is inspired by a particular historical detail, Governor Bligh’s enormous military muster of 1807. In the early days of the Australian colonies military resources were pretty dire — there were never enough troops to keep the peace for such a huge population of convicts, and the NSW Corps were given the crappiest of equipment and ordnance (and yet somehow expected to be the front line of defence if other European nations, such as France, decided to invade the colony). Every Governor had complained about this dangerous situation, but it took the irascibility of Bligh to ramp it up a notch. In order to prove to the Colonial Office back in London exactly how terrible the military situation in NSW truly was, he commissioned a team to travel throughout the colony and tabulate a full muster of all troops and ordnance, documenting all the stuff that didn’t work. In the end this grand plan of Bligh’s led to nothing … but it provides an excellent concept for a Convicts & Cthulhu campaign.

So … that’s what this Ticket of Leave concentrates on — providing the historical, game, and narrative resources that a Call of Cthulhu Keeper might need to put together an extended series of scenarios which feature the intrepid investigators travelling to the most far-flung parts of the colony to gather information. Given the poorly-explored nature of the landscape at this time, there are ample opportunities for concealing any number of terrifying Cthulhu Mythos threats in places where “the hills rise wild.” And of course, there is always the chance that investigators digging too deeply into the records of the colony might stumble upon certain … irregularities … that need to be cleared up to ensure that the results of the Governor’s grand muster  will stand up to scrutiny. Whether it’s encounters with terrifying alien menaces, or battles against black-hearted murderers or cultists, this campaign frame has opportunities for incorporating any number of different threads, all within an overarching narrative construct. Plus, there is always the possibility that by piecing together disparate findings from different parts of the colony, investigators might stumble upon something really big … because “we live on an island of ignorance”, etc, etc.

The PDF is rounded out by a detailed scenario sketch that could easily be used as a springboard for a longer campaign spent gathering the Governor’s muster. The scenario involves a curious anomaly in the records held in lots of different parts of the colony — all of them record a certain Ensign Dobley as being among their contingent, but in reality there seems to be no such person. Or rather that he seems to exist, but nobody knows where he might be currently found. It is a mystery that needs urgent resolution for the statistics gathered to have any meaning at all. Rather than give just one Cthulhu Mythos explanation for this strange phenomenon, the PDF provides three different “solutions” each of which makes use of a different style of threat, allowing the Keeper to pick the flavour of horror he wishes to inflict on his players.

“Ticket of Leave #4: The Vanishing Ensign” is available for download right now — scoot over to RPGNow to secure your copy. And if you do decide to chip a dollar or two to help us keep the pipeline of glossy, high-quality, supplements going … you will incur our eternal thanks!

Colour me blown away — purely by chance we just discovered that Convicts & Cthulhu was nominated for the category of “Best RPG Supplement of 2016” in this year’s Golden Geek Awards. Sadly, we only learned of this news a few hours before voting closed … otherwise we would have spruiked far and wide for votes! Ah well, as they say — it’s great just to be nominated.

In other Convicts & Cthulhu news, Cthulhu Reborn are right now working with Geoff Gillan to put the finishing touches on a double-sized Ticket of Leave supplement which gives C&C Keepers an entire new campaign frame for their 18th Century convict tales of horror plus an extended scenario sketch to get their campaign rolling. If all goes well that should be released sometime in March. Beyond that there are quite a number of other products bubbling away — some related to Convicts & Cthulhu, some in completely different Lovecraftian domains. So we’re quietly hopeful that 2017 will be a year of many horrific publications from us!