I am just back at Cthulhu-Reborn-Central after 2 & 1/2 days spent in Melbourne for PAX Aus 2016. At the convention I had the opportunity to hang out with the Chaosium folks and also meet up with many great Call of Cthulhu writers, past and present. In fact I even had the absolute honour of sharing the stage with many of those same writers for a really entertaining panel session titled “The Cool of Cthulhu” which delved into the many different reasons why HPL’s creations are successful today and how much the CoC RPG has helped that success.

However, the highlight of PAX was undoubtedly meeting dozens upon dozens of gamers and running sessions of Call of Cthulhu. My aim this year was to get some Australian content onto the Chaosium running list. So, while there was ample Arkham-based mischief being run for gamers who wanted it there was also four different Australian-themed scenario — all of them from future or recent publications. Thanks especially to Tristan who ran three separate sessions of Phil Anderson’s eerie Tasmanian scenario “Black Water, White Death.”

One of the best play experiences I had, though, was running “Un-Fresh Off The Boat” for a group of six players on Saturday morning. This run of the scenario featured all the things that make Convicts & Cthulhu such a compelling setting. We had moments of high tension between the three convict investigators and the military investigator who suddenly had responsibility for the (unruly) convicts thrust upon him. We also had investigators on both sides struggling to come to grips with the new society that they were about to join — with convicts desperately trying to figure out ways that they might clamber up from the bottom of the social heap to avoid the worst that the colony has to offer. There was plenty of revulsion (again on all sides) when confronted with the nature of “convict settlement justice” … although that was as nothing compared to the revulsion that they encountered when the forces of the Cthulhu Mythos entered the scene. 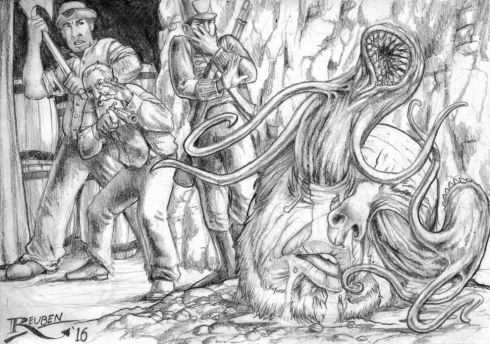 In the end the scenario ended with many semi-insane investigators trapped in a room with a pair of horrors while one of their number set off an enormous explosion by selflessly dropping a lit lantern into a prised-open barrel of gunpowder. It was almost a total-party-kill, although the reluctant leader Captain Ross did manage to survive to limp back to civilisation to explain. Or to try to explain at least. It seems like a Call of Cthulhu type ending 🙂

In prepping this scenario for convention play I created a bunch of resources that others might find helpful. Here’s some download links:

BTW: if you do use this material to run your very own convention session of “Un-Fresh Off The Boat”, we would love to hear about it (and in particular how well the scenario ran for you)! 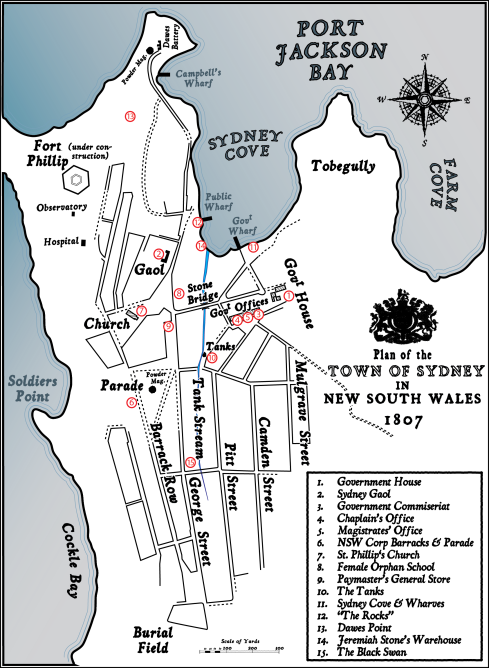 Finally, thanks to the six brave players who signed up for the Convicts scenario — they all approached their chosen roles with great enthusiasm and commitment. A particular thank-you to the (I assume) father and daughter group who took on the two female characters (the plucky free settler Charlotte Savage and the mild-mannered convict Molly Rowson). Both did an incredible job at portraying their characters and trying to establish a moral compass for the group when conflict threatened to tear the group apart … I’m sure the fact that the players hail from somewhere not too far from Sydney Town made it just that bit easier to imagine the squalid life of NSW convicts 🙂