It started out as a simple enough requirement. For an upcoming project I was trying to find a full-page 1890s character sheet for a character who is of a more artistic bent than the  stuffy-old bewhiskered types who seem to normally take the leading light in Cthulhu By Gaslight adventures.

My first port of call was, obviously, the Chaosium website … where you can grab (for free) some nice PDFs of all the sheets from the latest edition of the game, including an 1890s character sheet. Problem solved, you would think … well not really. The Chaosium sheet is ok I guess, in a functional sort of way. But it lacks the kind of elaborate Victorian look that I was hoping to evoke. You know, the kind of  bohemian, absinthe-stained decadence that you naturally associate with artistic types of this “yellow” decade.

So I continued my search around the net, and didn’t really find any other sheets that would fit the bill any better. Along the way I looked at a lot of clipart and design books on the Victorian period, and realised that the look  I was really searching for was that of the Art Nouveau movement.

Anyway, to cut a long story short … I figured I would take a go at redesigning the Chaosium 1890’s character sheet in an Art Nouveau style (using all that clip art that I’d unearthed).  In the end I decided to do both sides of the sheet (although for my particular application I will probably only need the front).

And here’s the finished item.

Here are some JPGs of the design. First, the front side of the full sheet (scaled down) , 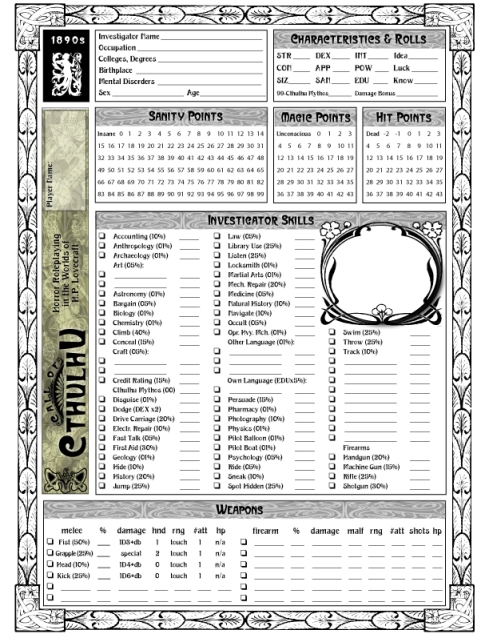 some detail of my Art Nouveau Call of Cthulhu logo,

Here’s the sheet itself … I made different versions for folk who use A4 sized paper and those who use US Letter. Click on the links below:

If anyone out there is running an 1890s Call of Cthulhu campaign full of artistic and decadent sorts … feel free to grab this sheet and use it however you’d like. Alternatively if you are running a straight 1890s game but would like some sheets more evocative of the art of the late Victorian era, again these are here for you to use. If you do anything creative with them, feel free to drop me a line to tell me about it (or post about it on the yog-sothoth.com forums)!

The layout of these sheets (and most of the text) is identical to the 1890s Character sheet from the Chaosium 6th Edition Call of Cthulhu rules. Those aspects are copyright Chaosium (but have been distributed freely). The bits I have added, including the graphics, text ornaments and logo I am happy to release under the same Creative Commons license I have used for releasing other media on this blog.

Reborn: “In A Different Light”

A long, long time ago — about 18 years ago in fact — I wrote a few lengthy submissions for “Call of Cthulhu”. The first of these was a scenario called “In A Different Light” which takes its inspiration from Lovecraft’s story “From Beyond”, but set in Chaosium’s (then-brand new) Lovecraft Country. The scenario was submitted to Chaosium in 1993 or 1994 and received some very nice feedback from Lynn Willis. But at around that time, I guess they had about a hundred authors all submitting adventures in Lovecraft Country. So mine, like most of the others, sat in a pile awaiting possible future publication. This was in the era before the existence of MULA Monographs, so Chaosium’s annual output of books was not exactly rapid.

After revising it once in 1996 and re-submitting it, I eventually gave up all hope of it ever being published and, at the very end of 1999 submitted the scenario to the (free online) Chaosium Digest. It appeared there spread over a few issues starting at Volume 29, Number 12 (January, 2000).

I would have to say that since then … I have done absolutely nothing with this scenario. Right up until last week, when I happened upon a few threads in the Yog-Sothoth.com forums talking about the relative merits of different free scenarios, in which a few folks recommended “In A Different Light”. But — as these posters pointed out — the scenario as presented in the Chaosium Digest is a little sparse in the way of prepared player handouts and maps, which makes running it a little bit of work for the Keeper.

Well, I thought to myself, I can remedy this … So armed with a copy of Adobe InDesign CS4, a few stray clipart collections, some good sources of online public domain photos, and the wonderful HPLHS CDROM I rolled up my sleeves to try to put together a halfway decent layout, complete with handouts. Four or five days later, I’m pretty happy with the results. And more than happy to release the finished product to whoever is interested enough to download it (under a Creative Commons license, which means you can do basically anything with it except make money).

The layout stretches to 28 pages of formatted text & art plus six (colour) pages of Player Handouts. In total, the PDF is a shade under 11MB.

To give you an idea of what you’ll be getting if you choose to download, I’ve taken some JPG images of a few pages.

Here’s a sample of the page-layout (actually the front page of the adventure). Click for a larger version. 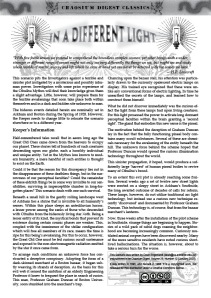 Here are two of the player handout pages (the newspaper clipping page, and one of two sets of extracts from a journal). Click each image for a larger version. 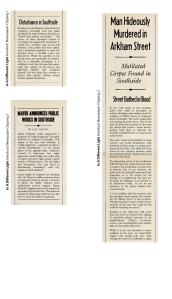 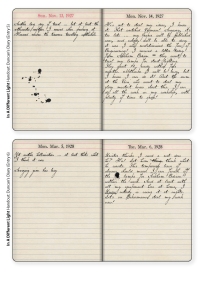 I’m not going to summarize the scenario here … it’s been out there for over a decade, and others have given brief descriptions over on the Yog-Sothoth forums. Have a read of some of those (or take a look at the text-only version here) if you need to be convinced you want to part with 11MB of your download quota. Despite having entirely overhauled the appearance of the scenario, I have resisted the temptation to make any significant changes to the content.

If you do want to download the PDF, you can do so simply by right clicking on the link below and select “Save As” from your browser’s pull-down.