Following on from the post earlier in the week … Cthulhu Reborn are delighted to announce that our fifth freebie PDF book — Geoff Gillan’s mind-blowing “The Machine King” — is now available for download. Scroll down to the bottom of this announcement for links (or if you’re impatient, just jump across to our Downloads page) 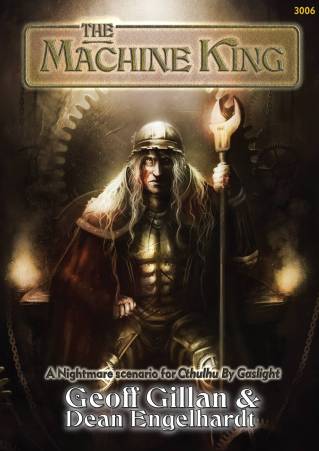 This book has been a long time in the making: the scenario was first written by Geoff back in 1995 and we have been working with him since April last year to revise the original text, give it a thorough editorial treatment and commission some art which realises the grand and imaginative vision of the scenario. For this latter task we were extremely fortunate in securing the talents of Cinthya Álvarez (aka CinTheBarbarian) whose moody portraits and depictions of mechanical monstrosities perfectly complements the themes in Geoff’s writing.

Although “The Machine King” was always envisaged as a freebie release, in terms of production values, we have treated it with exactly as much attention to detail as we would apply to a commercial release and we’re very pleased with the visual look that Cinthya’s amazing art has allowed us to achieve. 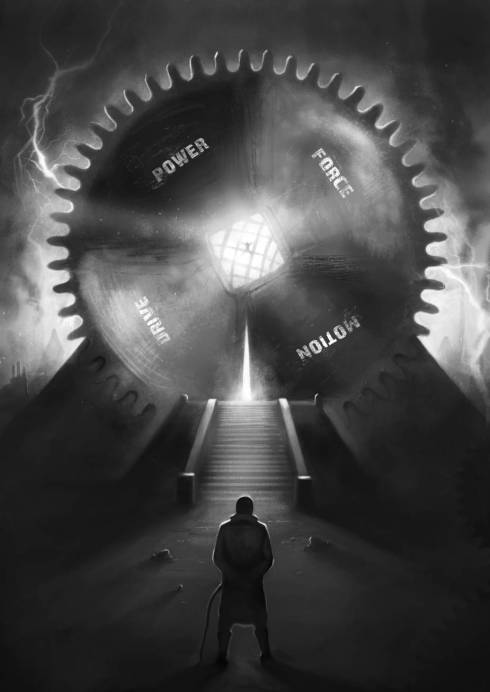 In his Geoff’s author intro to “The Machine King”, Geoff describes the curious path by which this “musty old work” has finally made its way to publication:

For once when I say musty it is not hyperbole. The manuscript was feared lost when most of the contents of my home were destroyed back in the Wollongong floods of 1998. Since it was written years before, for a Chaosium Dreamlands book that never got beyond the planning stages, the typescript was the sole copy. After the flood cleanup it could not be found. I felt its loss quite keenly since unusually among my own works, I actually liked it. Years passed and my friend and brother in law, Martin Knight was clearing out his garage and found a garbage bag full of stuff from my flood cleanup. The cleanup had been a frantic drive to claw up as much as could be salvaged since we were warned by the cops that looters would be by as soon as the premises were left unattended. Boxes and bags were packed up and went in all directions. In the garbage bag were a bunch of my old manuscripts, still stinking of river mud but essentially intact. I rejoiced that some lost material had been found, but being then in the middle of yet another house move, I boxed it all up in an airtight container and promptly forgot about it.

Skip forward another decade and I was contacted by Dean who wanted to bring to life an old adventure of mine, The Past Is Doomed. I let him loose and in the process gained not just an editor and colleague but a good friend. As you all probably know Dean has an insatiable hunger for old Chthloid scribblings and is probably more to be pitied than shunned—in this spirit, when he asked me if I had more from the old days, I began to wonder. Was Machine King, the unwanted Dreamlands scenario still around? Could it be that Martin, ironically one of its original playtesters, had salvaged it unknowingly from the river muck? I had a vague feeling it was among those papers but it had been so long I could not honestly remember. So I rummaged through the papers in my current house in Brisbane and there after much digging in all the wrong boxes was a clean Manila envelope with an ancient manuscript inside. Also there were all the notes and photocopies of steam-age illustrations that had inspired it … 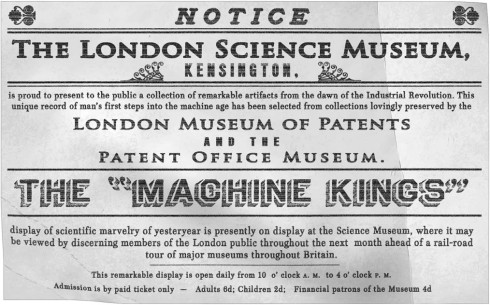 You can download your own ABSOLUTELY FREE copy of “The Machine King” using the links below. The difference between the two versions is simply that the “Printer-Friendly” version omits background textures and the ornate borders around text boxes to make them a little less “ink hungry”. Both versions are 65 Page full-production PDFs with colour covers and greyscale book interiors. Each PDF is a 17MB download.

As always with all content that published here on Cthulhu Reborn, this is provided as a copyrighted file but freely distributable under a Creative Commons license. That means basically, you can do whatever you want with this material … except make money out of it. In case it isn’t obvious, the copyright holder here is Geoff Gillan & Dean Engelhardt for the text and layout.

On a personal note, I would really like to thank Geoff for working with us so closely to adapt his remarkable adventure via the addition of a considerable amount of content, and also the re-imagining of the story in a different setting (the Gaslight era rather than the 1920s assumed by the 1990s Chaosium book). Thanks also to Andy Miller for his excellent work doing copy-editing for this book!

Well, the good news is that it’s “Full Steam Ahead” on finishing up our next freebie CoC Scenario for release here on Cthulhu Reborn. As announced a little while back Geoff Gillan’s “The Machine King” is an absolute (almost) lost classic, written by one of the games most loved writers … so of course we are excited about the fact that we will be publishing it. Hopefully within the next week.

In the interests of providing loyal readers of the blog with a few “sneak peeks” at this book before its release, I’ve put a few (hopefully spoiler-free or at least spoiler-light) snippets from the book layout below. Readers of Geoff’s previous scenario work for Call of Cthulhu (e.g., his pivotal work on “Horror on the Orient Express” or his often-cited war scenario “Regiment of Dread”, and our own “The Past Is Doomed”) will know that his stories are always packed to bursting with imaginative and dark ideas. If you’ve been lucky enough to read his published fiction (e.g., his wonderful, yet hard-to-find fantasy novel “Envious Gods”) you’ll know that this frenzied and vivid tone is something they too share. So, it’s no surprise that “The Machine King” is darkly baroque, offbeat, extravagant occasionally whimsical — all the things that define classic Gillan.

… and if the Investigators cannot put a stop to the bizarre (and old) machinations behind the vision, they might be unlucky enough to witness some very odd mechanical intrusions into the real-world of Victorian London:

Here’s how the scenario is described in the (spoiler-free) blurb from the back cover:

Victorian London: Heart of the most industrialised empire the world has ever seen. A heart that pounds to the rhythms of steam hammers,  pistons, and whirring cogs.

Since the time of the Industrial Revolution over a century ago, London has been at the forefront of mechanisation. Every facet of life now brings men of all stations into daily contact with the coldly implacable machines which free them from the back-breaking labours of earlier generations.

The rise of the machines cemented Britain’s dominance over the world … but has it made men slaves to the very machines that were built to liberate them? And do the machines have their own cruel ambitions and dreams?

Curious reports have begun to circulate London claiming the impossible: machines have been witnessed acting on their own volition, attacking innocent men and women.
What strange power drives otherwise unremarkable lumps of cold metal to murder? What fuels the odd machine-haunted dreams that nightly plague hundreds of Londoners?

In a world ruled by machines . . . who rules the machines?

To give you an idea of how the book design has turned out, below are a couple of page spreads from the finished layout (featuring more art from Cinthya Álvarez as well as my own humble map-work). Some text is blurred to avoid spoilers. 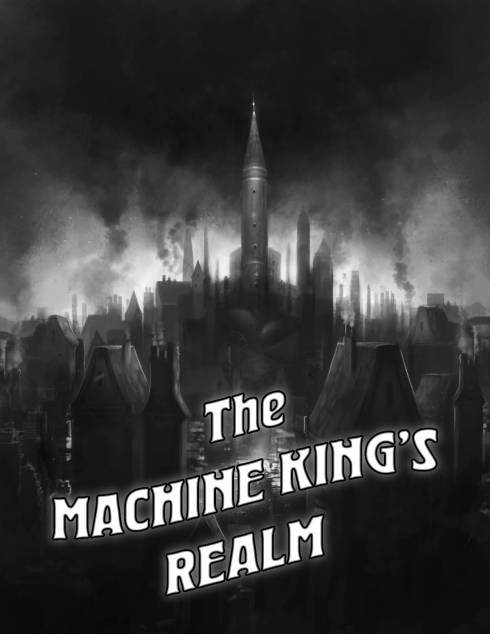 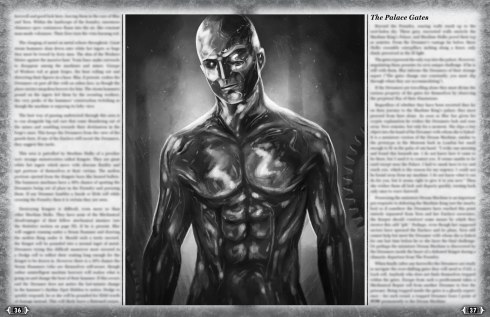 When Cthulhu Reborn was created — way back in the mists of time (well, 2011 to be exact) — it’s principal mission was to be a vehicle for publishing high-quality, professionally-designed, and above all FREE material for Lovecraftian tabletop gaming. And while we’ve done a reasonable job at creating a few highly-regarded titles (see our downloads page for the full list), we would have to admit that it HAS been a while since we last released a freebie title. This isn’t a deliberate decision … lots of other stuff has kept the Cthulhu Reborn minions fully occupied for quite some time. It has always been our goal, though, to release more free stuff under the Cthulhu Reborn imprint.

Today we are incredibly, INCREDIBLY happy to be announcing the next title in our line of free scenarios for Call of Cthulhu, Geoff Gillan’s incredible “almost lost work”, The Machine King.

The story behind this scenario’s long journey to publication is almost as convoluted as the tale itself. Originally commisioned in the mid 1990s by Lynn Willis for an abandoned Chaosium book of “alternative dreamlands” scenarios, Geoff’s sole copy of its typescript has certainly been through the wringer over the intervening years. Most notably it was believed for many years to have been destroyed when Geoff’s home in Wollongong was one of many inundated by damaging floodwaters in 1998. But you can’t kill a truly horrific Lovecraftian tale that easily … and thanks to some detective work worthy of a Spot Hidden check (or maybe a Rummage Through Garbage Bags check), the manuscript was rediscovered a year or so ago. Since then, Cthulhu Reborn has been working closely with Geoff to polish the original text, put it through several more rounds of editing, and finally commission some brand new custom art to do justice to the insane world described in Geoff’s scenario.

All that work is now mostly finished: the text is locked down and proofed, the layout is complete and we are just waiting on a couple of pieces of final art … and then we will unleash “The Machine King” upon the world as a free, fully-illustrated, deluxe 64 page PDF. Fingers crossed for a late August or early September release date! We will be offering a few sneak peaks at the wonderful custom artwork (by long-time Cthulhu Reborn art department stalwart Cinthya A.) and page layouts … so … watch this space 🙂