UPDATE 2 June: Because several folks have encountered difficulties in transferring funds to Paul’s charity in “payment” for his scenario, he has now made it available for “purchase by donation” at DrivethruRPG. Click here to go to the Drivethru product page for “Dockside Dogs.”

This is a particularly exciting development for me … as the process of preparing a PDF for distribution through Drivethru gave Paul the opportunity to add a slightly more complex layout to his (already quote nifty) scenario, and I was fortunate enough to assist in the process. One of the cool design elements I was able to donate to the final product was a front/back cover design based around the graphic I posted here a little while ago: 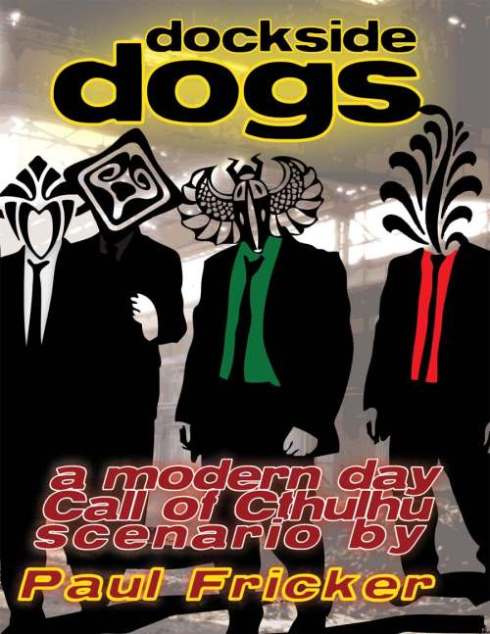 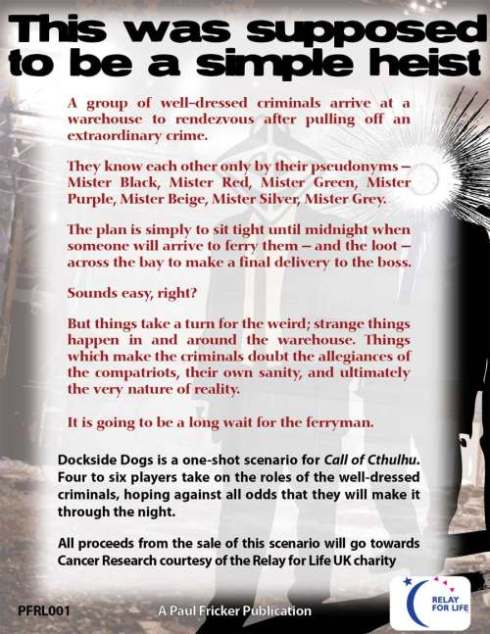 Now, I don’t usually use this blog to promote the fundraising efforts of other folks — there are plenty of other venues where such information is posted. I thought I’d make an exception, however, for a fairly remarkable (and not very publicised) Call of Cthulhu charity fundraising drive being run by Paul Fricker over on the Yog-Sothoth forums.

Some would know Paul from his two excellent, if extraordinarly quirky and mind-blowing, published scenarios. His Gatsby and the Great Race monograph (plot summary, including spoilers here) stands as probably the most remarkable book in that product line from Chaosium. He also wrote a mind-twisting futuristic scenario called “Little Sister Will Make You Suffer!” for Cubicle 7’s Cthulhu Britannia.

Paul recently lost his father to cancer, and has decided to release a 28-page PDF scenario with all funds going to Relay for Life, a UK Cancer Research charity. His scenario is called “Dockside Dogs” — you can find out more about it here, including how you can make a donation to receive a copy of the PDF. He is suggesting a donation of £3.25 / US$5 in return for the scenario … but given the cause, and the quality of the scenario I would encourage folks to donate more than this (minimum) asking value — I did.

In order to try to explain the general vibe of Paul’s “Dockside Dogs,” I hastily put together this poster from a range of stock elements available freely from a variety of sources: 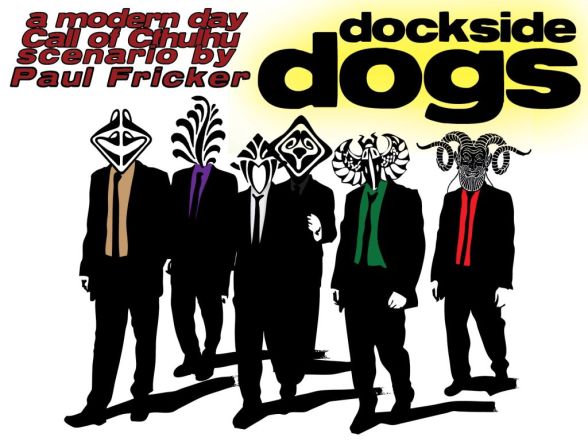 As you can probably tell from the picture, the scenario shares an underlying premise to a certain Quentin Tarantino film … but, if you can imagine that basic idea being remixed by Philip K. Dick with a liberal dose of the reality-twisting Cthulhu Mythos and a dash of Inception — that’s what this scenario is a like.

If you like your Cthulhu scenarios with a touch of the surreal and (at least the potential for) lots of distrust and paranoia between players … you should seriously consider Paul’s scenario. While written for Call of Cthulhu its structure would, I think,  lend itself very well to both Trail of Cthulhu and Cthulhu Live (or other LARP gaming) as well.

Update 27 May: The Cristoforo font Kickstarter has been relaunched. The links below have been adjusted to direct you to the new page. If you previously pledged funds and haven’t added a pledge to the new fundraiser, you should click one of those links and do so!

Anyone who has ever played the Call of Cthulhu roleplaying game (or most of its translated versions) will have encountered the beauty that is the title font, Columbus, which was used for the covers of books through its first couple of decades of life.

You may not know that the Columbus font is actually a Victorian-era Amercian display font … which has been digitized in a very limited way, but which has never really had a proper revival. The free versions (and even the “for money” versions pale in comparison to the samples you can see in old 1890s typographers specimen books — I know, I went searching for some :-)).

One of the worthy folks over on the Yog-Sothoth forums — a wonderful guy and resident professional font guru Thomas Phinney — is currently running a Kickstarter project to go through the painstaking process of digitally restoring Columbus (or Cristoforo as he’s calling it) to full digital glory, ready to be used in generations of new Cthulhu books (if the publishers wanted to do that, hint hint). As of right now, the kickstarter has a bit over two weeks to run.

The covers of the early Call of Cthulhu books have huge nostalgic value for me (as well as being extraordinarily fine pieces of cover art in themselves). I didn’t realise until I pulled them all out again and looked how much the Columbus font sort of “defines” the feel of the covers.

As my own little homage to those covers, and to Columbus, and Thomas’ worthy aims to drag it, tentacles flailing, into the 21st century, I’ve put together a poster (click for a larger version). If it brings back as many memories to you as it did to me while creating it … you should seriously consider backing the Cristoforo Kickstarter — if only to encourage all those pesky game designers that they really *should* be making book titles which look as beautiful as these ones … 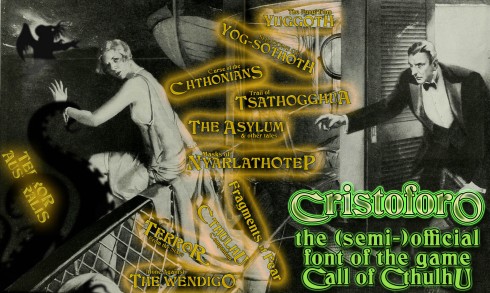