Most people would be aware that the Cthulhu Reborn blog was originally created as a way to bring-back-to-life some old gems from the early days of Call of Cthulhu scenario publishing. Hence we are absolutely excited to see the announcement today of a new Kickstarter by Sentinel Hill Press, great friends of the blog. 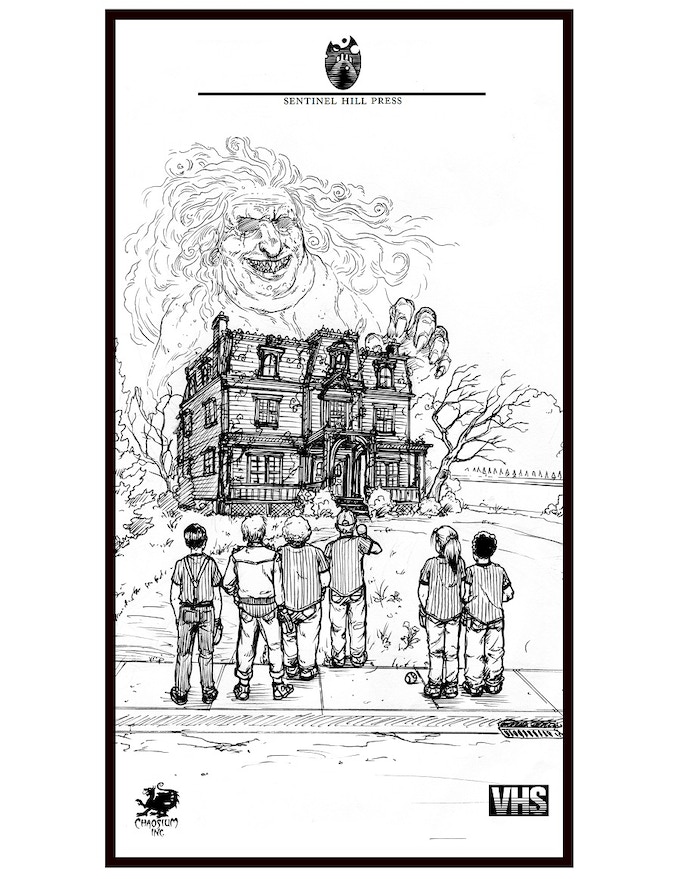 “The Dare” is a scenario written in the early days of Call of Cthulhu by Kevin Ross, one of the all-time great authors to have ever written for the game. It’s biggest claim to fame is that, rather atypically, it affords players the opportunity to take on the roles of everyday 1980s kids who innocently become swept up in the horrors of the Lovecraft Mythos, courtesy of a haunted house (Stranger Things style). The scenario was published in 1996 as part of an anthology titled Dwellers in Shadow. That book was released by a small licensee publisher, Triad Entertainments, and likely only printed in smallish print runs. That means that this great scenario — and many others from this era — are now almost impossible to find; this problem is exacerbated by the fact that Triad closed its doors long, LONG before the era when books were released as PDFs.

Not content to have such a wonderful piece permanently inaccessible to 21st century gamers, Sentinel Hill have chosen to not only reprint this classic, converted to the current 7th Edition. They have also decided to greatly expand upon the original ideas of Kevin Ross, turning the scenario into a much more substantial piece — but one whose “essential salts” are still firmly Kevin’s original concept.

We are very excited by this project — it’s exactly the sort of thing we love. If you think a dose of classic, long-out-of-print scenario madness might also be your thing, you can check out the KS campaign page. But if you are thinking of backing, don’t hesitate too long … unlike most Kickstarters, this one only runs for 10 days!

Convict with the Midas touch?

Most readers with an interest in Convicts & Cthulhu will probably have heard something about the series of Gold Rushes which formed an important part of Australian Colonial history, bringing thousands of people to the newly formed colonies in the 1840s and 1850s. What very few people will know, however, is that these momentous discoveries of precious gold were not in fact the first occasion that Australia was seized by gold mania. Very early in the history of New South Wales, a convict named Daley stunned the colonial authorities by revealing that while out on an assignment to a remote part of the colony he had stumbled upon a gold mine! Not only that, but he had extracted enough ore to make a sizeable sale to a ‘black-complexioned man’ who was purportedly crew on a visiting ship.

Understandably many people became very excited by this news, not least the colonial authorities. Despite Daley first requesting only that he be granted passage back to England in exchange for the location of his valuable find, the Government was more keen to have the convict show them the place himself. And this is where the whole tale came unstuck for the entirety of Daley’s elaborate story was, in fact, a monstrous hoax. There was no such gold mine, no such ‘black-complexioned man’, and the nuggets which the convict had produced as evidence were in fact other pieces of gold and bronze that he had scavenged together and mashed into aggregates. And it was with the (painful) revelation of this audacious lie that the unsung Gold Rush of 1789 died.

Except of course, in the world of Convicts & Cthulhu it doesn’t need to … such a colourful yarn of duplicity, dishonour, and brazen desperation has all the makings of a superb tale of dark and gritty horror. All that it needs is an injection of weirdness. Perhaps the so-called nuggets were something other that natural? Perhaps the convict was actually enthralled by some other force, compelling him to make such wild claims? Or Perhaps the real lie is the one the convict told when recanting his tale after receiving three hundred lashes?

Horrific renditions of the Fake Gold Rush tale are the subject of Ticket of Leave #7: Seams of Peril, which Cthulhu Reborn is delighted to release today as a free download. This lavishly-illustrated 14 page PDF includes information about the historical hoax, and the types of perils that might face a group sent to verify the claims of a spurious gold-mine in remote areas of the Blue Mountains. It also includes three different Mythos threats that could explain the weirdness that accompanies the convict’s claim. Each of these provides a different type of adversary, and a different flavour of Lovecraftian supernatural horror; allowing the Keeper to pick the type of peril that best suits his or her tastes (or those of the gaming group). We hope that Keepers will enjoy sending their Investigators off on wild (golden) goose chases out into perilous, unexplored parts of the colony — to be cruelly devoured, seduced, or just stabbed in the eye by a lying convict. What could be more fun?

Please note: this is the first Ticket of Leave that we have released under Chaosium’s new “Fan Use” policy. In order to comply with the terms of this policy we have been obliged to create two versions of the PDF — one with game stats and one which omits game stats. The version downloadable direct from Cthulhu Reborn is the statted (Call of Cthulhu 7th Edition) version. This is distinct from generic non-statted version downloadable from RPGNow. Most readers will want the direct download version, however customers who only obtain PDFs via RPGNow/DrivethruRPG are welcome to download the generic (systemless) edition if they prefer.