No Use Crying Over Dateline: Lovecraft

When we released Dateline: Lovecraft as a PDF back in September, we made a promise that we’d use all profits made from its sale to commission extra scenario content to make the Dateline prop even more useful for those who had taken the plunge to purchase it.

It took a little while for the sales of the Dateline PDF to recoup the original costs to produce the core product, and also the cost of the first free supplemental PDF, “Help Wanted” which we released as a sample of what the “freebie add-ons” will be like. But by November, we had pretty much done that … and all money raised started going towards paying to commission the second supplement — Noah Lloyd’s “Smoke Green”, released in early January.

Now, thanks to a surge in PDF sales (perhaps a side-effect of word getting out about our experimental print run), we have raised enough  to pay for a THIRD freebie supplement. So … without further ado, let me introduce “Spoiled Milk,” a 21 page newspaper tie-in scenario by Jo Kreil, downloadable right now from here on Cthulhu Reborn. 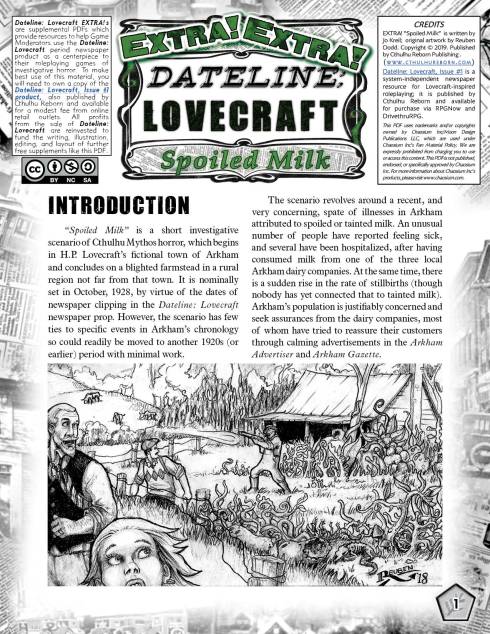 People who have read closely through the Dateline: Lovecraft newspaper prop might have noticed that there is an unusual number of articles which somehow relate to Arkham’s tainted milk, and the deleterious health effects. In fact there are three separate articles peppered through the paper that relate to this one topic … not to mention the three advertisements by local Arkham dairies promoting the uniquely “healthful” nature of their produce. It’s enough to make you wonder if perhaps there is something … up … with Arkham’s milk supply?

The always reliable Jo Kreil latched onto this when we asked her to write another scenario to tie-in with Dateline: Lovecraft, penning an interesting scenario which paints a rather unique health scare for Arkham. As is usual with our scenario formats, there isn’t a single weird explanation for the tainted milk epidemic but rather the scenario provides three different options for the GM, each of which will lead to quite a different style of scenario (or at least, supernatural adversary). Whether you like your alien menaces dark, insubstantial and brooding, or potentially planet-destroying and apocalyptic — this scenario has you covered. While it technically needs the Dateline: Newspaper to provide some of the scenario’s key props, an imaginative GM could probably fill in the gaps for themselves if they didn’t want to purchase our product (but we didn’t tell you that).

“Who is responsible for the epidemic in Arkham that has left dozens of tumor-ridden and mutated patients in hospital? Are the authorities really blaming it on spoiled milk?”

EXTRA! “Spoiled Milk” is a short investigative scenario of Cthulhu Mythos horror,that starts in H.P. Lovecraft’s fictional town of Arkham and ventures out into some of the adjacent countryside. The strange events related in this dark tale from legend-haunted Arkham center upon the public health crisis that has swept to the attention of many locals. Some foul taint seems to have settled upon the milk supplies which are delivered daily to thousands of Arkhamites. People have reported vomiting, bleeding … and other, far, stranger symptoms. The authorities have been aiming to keep a lid on it, but a plucky reporter from the Arkham Advertiser has received an ‘inside tip’ that promises to blow the whole scandal wide open.

Like we said earlier, this free add-on scenario was made possible thanks to the dozens of folks who have bought our PDFs (and also those who have chipped in a dollar or two for these add-ons, which are PWYW over on Drivethru). If you’d like to see more of these tie-in scenarios keep coming from Cthulhu Reborn, you can always spread the word about Dateline: Lovecraft to your friends and gaming colleagues. The more copies we sell, the more free stuff we will make. With this PDF now out in the wild, the “tally” is reset and every dollar raised gets us closer to a FOURTH supplement!

[ As with some of our other releases, we have been obliged due to fine-print in Chaosium’s licensing legalese to also create a separate non-statted (system-independent) version of Jo’s scenario “Spoiled Milk”. If you want to obtain that, you’re welcome to grab it from RPGNow when it goes up — it will be a pay-what-you-want title, so you can send a donation our way which we’ll happily add to the “make-more-Dateline-please fund” too. Alternatively, if you’d like to give us a thank-you donation for the free download hosted here, you can always visit our donate page — all monies raised goes towards further freebie Dateline add-ons. ]

Exit the Dateline; Enter the Zombies!

Thank you to everyone who spent some of their hard-earned cash to pick up one of the combo-packs of printed Dateline: Lovecraft newspaper and book. These sold far quicker than we had anticipated, and in the end our modest print run was well-and-truly exhausted a week or so ago. Everyone who ordered one should now have their printed Dateline winging its way towards them … though many folks have already reported it landing upon their doorsteps!

While we are very thankful to *everyone* who bought one of these packs, we do want to give a special shout out to a few folks who are serial supporters of Cthulhu Reborn and who chipped in above-and-beyond to help make this print run even more successful. Those folks are: Adam Alexander, Jeff Vandine, Douglas Bailey, and Perry Tatman. We feel very humbled to have such wonderful folks backing our publishing endeavours!

On a different — but no less exciting — subject, we recently got word that long-time collaborator and friend of Cthulhu Reborn, Geoff Gillan, has taken the plunge and created a publishing imprint for his genre fiction. Some hard-core Call of Cthulhu fans may already know that Geoff (in addition to being the driving force behind Horror on the Orient Express) has already had novel or two published in dead-tree format by major publishers. Not content with that, he has been madly scribbling away penning novels and short stories … and now, for the first time these will be available in eBook form. 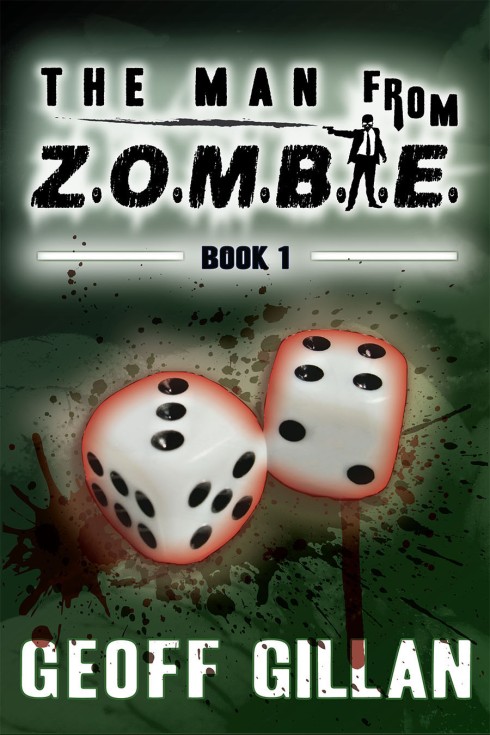 An advantage of being Geoff’s collaborator on Convicts & Cthulhu is that I’ve been able to get a sneak peek at some of these … in particular the first series of novels and stories, the “Man From Z.O.M.B.I.E.” series. If Cold War spy fiction tickles your fancy but you always wished for a little supernatural spice to season your Fleming or similar, these are definitely worth checking out. Similarly if you’re a zombie buff whose interested in unusual and innovative (not to mentioned nuanced) uses of the walking dead, maybe they might be your thing also.