It’s funny the huge variety of different visual styles people ask me to try to emulate in Call of Cthulhu handouts. I thought the weird and wonderful concepts I come up with for my own book projects here on Cthulhu Reborn were bad enough … but it turns out the folks who do this professionally dream up even stranger and more ambitious ideas they would like realised as handouts.

One of the tasks I tackled the other day was the design of an official-looking government dossier, laser printed and much-photocopied. The final product looked a bit like the picture below (although you will need to buy the Sixtystone book when it comes out to see the actual layout in its complete glory with actual text). 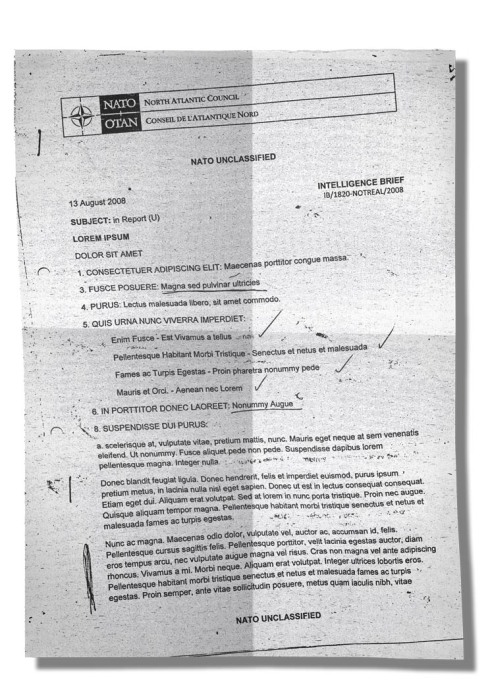 This particular design is a fairly extreme example of something that I do quite a bit … which is taking something that is nice and clean and distressing it mercilessly until it looks lo-fi and grungy. I thought some folks might be intrigued by a walkthrough of how this kind of effect is achieved.

For this particular piece I started out with something very mundane, namely a Microsoft Word document with the kind of extremely clunky and basic formatting that is typical of official government reports and documents. In real life these reports use the blandest and most default fonts and templates they can … so here I just decided to type up everything in Arial and judiciously bold a few titles, but not to try to do anything fancy. Then I printed out the page, scrunched up the paper, punched holes in the side, scribbled on it and stuck some staples in it. Then I slapped it on my scanner at a jaunty angle and scanned the page back in as a bitmap. [Aside: I’ve never figured out why, but the real-world guys who photocopy official government documents seem to *really* not care about whether they are straight or not. I figure it isn’t an artistic statement.]

The left hand figure below shows what the raw scanned-in picture looks like (click any of these images for a larger copy):

The basic scanned in picture looks ok … but it’s way too clean. First stop is Adobe Photoshop’s built-in “Photocopy” filter. It lives in the “Filter” menu under the “Sketch” category and is quite a nifty filter in its own right. It’s worth tweaking its two sliders to see what kinds of effects you can get … but a sort of typical result is the right hand figure above. Note that a lot of dirt has come out as well as a bit of bleed through of smudged-up stuff from the reverse side of the page.

This is pretty good, but it would be nice to mess it up a bit more. One of my favourite ways to distress documents in Photoshop is with the Mezzotint filter. It lives in the “Filter” menu under the “Pixelate” category. It basically adds different types of random messiness, whether it be grainy dots or random horizontal line segments. The figure below shows the result of adding some “Long Strokes” — see the noisy background of grainy lines which seems to cover the page background. 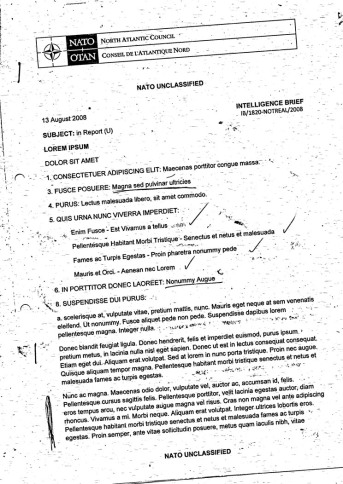 As well as messing around with the image via filters, another great way of adding distress is via overlaying textures. I went onto Google Image search and looked around for a while to find a few “Photocopy Textures” which were available as freeware downloads (there are a lot that are commercial stock images, but there are nice people out there in Internet-land that create these types of things for free download too). The picture below shows the result of overlaying the document with a separate Photoshop layer containing one of these textures. This is a semi-transparent layer — I set the blend mode to “Darken” and the opacity to 45% (values picked as the result of visual experimentation).

Finally, I picked another of the freeware “Photocopy Textures” and placed it on a fresh Photoshop layer that sits *below* the image of the scanned page. The idea here is that I wanted the text of the report to kind of blend into the texture of the photocopied page. This meant making the page layer semi-transparent — I picked an opacity of 72% and a blend mode of “Hard Mix” and this was the result:

Now, I guess that’s not the world’s tidiest picture of a report page and maybe not the easiest to read … but that’s kinda the point. It definitely looks like the kind of thing you’d see on some dodgy conspiracy theory website or site for government leaks … and let’s face it, those are the sorts of places Call of Cthulhu investigators are going to go looking for official information …

BTW: for those that are curious — the folded page effect shown in the picture at the very top of this post wasn’t actually created in Photoshop but using another tool: AutoFX DreamSuite.