Today we are very excited to announce the release of the second entry into our newest line of support materials for Convicts & Cthulhu, the C&C Musters. We debuted this format back in December — it’s basically a short supplement which examines a real-world historical figure through the lens of their potential for use in a Lovecraftian investigative game scenario. There are lots of ways to use historical character detail as an inspiration for new plots, NPCs, and even investigators — and the goal of the Musters is to give you the tools to do any of these with the background of an intriguing, real-historical figure.

C&C Muster #2, subtitled “The Master of Convicts” focuses on the eventful life of Nicholas Divine (sometimes spelled “Devine”) who served for most of the C&C era in an important government role of “Superintendent of Convicts.” This made Divine the man ultimately in charge of which convicts were assigned to which work gangs or other labour — obviously something that is important to you if you *are* a convict, but also if you are someone whose day-to-day life is enabled by plentiful free convict labour.

Perhaps even more interesting than Nicholas Divine’s official life are some of the details of his personal life. Sent out to New South Wales in 1789 aboard the HMS Guardian, Divine was an innocent party caught up in a dramatic encounter which left the Guardian fatally damaged thanks to an unfortunate encounter with an iceberg off the southern coast of Africa. This unusual situation came to be thanks to the ship’s captain making the decision, upon sighting the iceberg, to cautiously approach it to carve off ice to supplement the ship’s limited supplies of fresh water — as a sailing maneuver, it doesn’t go down in history as one of the Royal Navy’s finest (although to be fair to Captain Riou, the sudden night fogs that rose up shortly after the ice carving maneuver really didn’t help). But as an event with potential for exploitation in a Lovecraftian scenario … such an encounter is pure gold.

This PDF also includes some additional description of the 18th Century British practice of creating Prison Hulks — non-seaworthy ships converted to floating (temporary) prisons and left floating in the Thames or one of the major shipping harbours. Your convict’s backstory might very well incorporate some time spent aboard a Hulk (none of which BTW warrant the name “incredible,” quite the opposite in fact) … so it’s good to have some historical data to help fill in that part of his or her personal history.

C&C Muster #2 is an eight-page PDF available for download right now, from here on the Cthulhu Reborn blog. It has game statistics for the Call of Cthulhu 7th Edition rules.

Upcoming titles for C&C and Dateline

So the last few weeks here at Cthulhu Reborn Central have been mostly filled with stuffing envelopes with printed combo packs of Dateline: Lovecraft kits and transporting small mountains of parcels to the post office. We are now mostly done, and dozens of folks in diverse places around the world are now the proud (we hope) owners of genuine replica 1928 Arkham Advertiser broadsheets.

However, while we have been busy doing that, in the background we have also been making some progress with new releases for our product lines. I thought now might be a good opportunity to share some news about the next couple of things coming from us.

It’s been a few months since we debuted our new streamlined format for Convicts & Cthulhu, the C&C Musters. Overall the response to C&C Muster #1 (“The Turbulent Mason”) has been positive, so we will be continuing with this format for a second supplement, likely released in the coming days. That PDF will be subtitled “Master of Convicts” and cover the eventful real-world life of Mr. Nicholas Divine, Superintendent of Convicts at NSW. In addition to mountains of flavour-filled nuggets of real-world detail, we’ll also include some directly game-relevant material (such as fictional extrapolations of what *could* have been the cause of the terrifying sinking of the HMS Guardian!)

While we have been concentrating on getting physical packs of Dateline: Lovecraft out the door, we haven’t been checking as closely how well the PDF version is selling — turns out that those have been ticking away quite well. To the point that we are closing in on raising enough funds to commission and publish a third Dateline EXTRA! freebie PDF to tie-in with the prop newspaper. We’ve already picked which manuscript we’d like to release next … and it’s another cracking scenario by Jo Kreil called “Spoiled Milk.”

If you’ve spent any time poring through the numerous articles and advertisements in the Dateline newspaper prop, maybe you have noticed the unusual number of references to Arkham’s milk supply, and concerns about tainted milk? Well, Jo certainly did, and she has woven those different mentions into an investigative scenario with three different (but equally nasty) Mythos explanations for exactly what is going on. It’s enough to make you want to give up on dairy forever.

Here’s the brand-new illustration from Reuben that will accompany this new EXTRA! coming soon-ish … (if PDFs keep selling at their present rate!)

Printed Dateline Spotted in the Wild

It’s been a fortnight since we announced that a small batch of printed Dateline: Lovecraft combo packs (broadsheet newspaper + accompanying softcover book) were available for sale. Since then a lot of people from many corners of the globe have been in touch … and we have mailed off a small mountain of packages.

Some of them seem to now be arriving at their destination. Here’s one spotted at the breakfast table of Mark Morrison:

and here’s another seen lurking in the vicinity of YSDC founder-and-operator Paul Maclean.

If you are thinking that you would like to get your hands on one of these packs, there are still a few available but they will probably sell out. Looking at the once-full box of broadsheet newspapers, I think there are around 15 copies left. Once they are all gone that will be it for the current print run. We probably will be making more of these … but likely not until the second half of the year.

If you are interested in grabbing one of these packs, drop me a message via the form immediately below this line!

In the first blog posting in this series I provided the “helicopter-view” of the year’s releases, which is probably the place to look if you want a quick overview. The rest of this series consists of more details analysis of 2018 releases.

The Dark Future: Kickstarters yet to fulfil

So far, this review has described products which have made their ways into customers’ hands in some form or other. Another interesting thing to look at is the products that are still in the process of breaking through into our reality … namely, the Kickstarters that are yet to be fulfilled. Some of these are older campaigns that were supposed to have completed in 2018 (or even earlier); others are campaigns run in 2018 for products that won’t grace the gaming table until 2019 or later.

Before summarizing the list of Kickstarters-in-waiting, special attention should first be given to one KS campaign: Pagan Publishing’s Horrors of War. This originally funded back in September 2014 with an estimated fulfillment date of February 2015. Despite making apparent progress, this campaign has now taken the non-coveted crown for “most delayed” (now that Punktown, the previous title holder, has been released). In 2018, as part of a general “call to action” to the operators of several much-delayed Kickstarters, Chaosium gave Pagan Publishing an ultimatum – release Horrors of War before the end of 2018 or lose the license to release it as a Call of Cthulhu title at all. For much of 2018,

progress was reported towards meeting that date, as well as paying refunds to a number of backers who requested them. But in November, the wheels seemed to fall off: Pagan made a backer update that announced that due to unspecified “serious problems” with the project, it would no longer be possible to hit the date laid down by Chaosium. At least part of the problem seems to have been created by one of the original key writers (a long-time Pagan stalwart) withdrawing his three scenarios – this meant that on top of other delays, three new scenarios needed to be written to replace them. The inability to meet the mandated deadline left Pagan looking into “other ways to continue the project” – one might assume that to mean potentially transferring the book to use a non-Chaosium-licensed game system. Ultimately, however, the crisis was averted a few days later when Chaosium unilaterally acted to extend the license for Horrors of War until June 30, 2019. Finger-crossed that this is enough time for the team to wrap up this fine-looking book. Original KS link: https://www.kickstarter.com/projects/460966263/horrors-of-war-a-convenant-with-death

Other Kickstarters that were originally targeting a 2018 date but have yet to release:

These campaigns were run in 2018 for products to be released later in 2019: 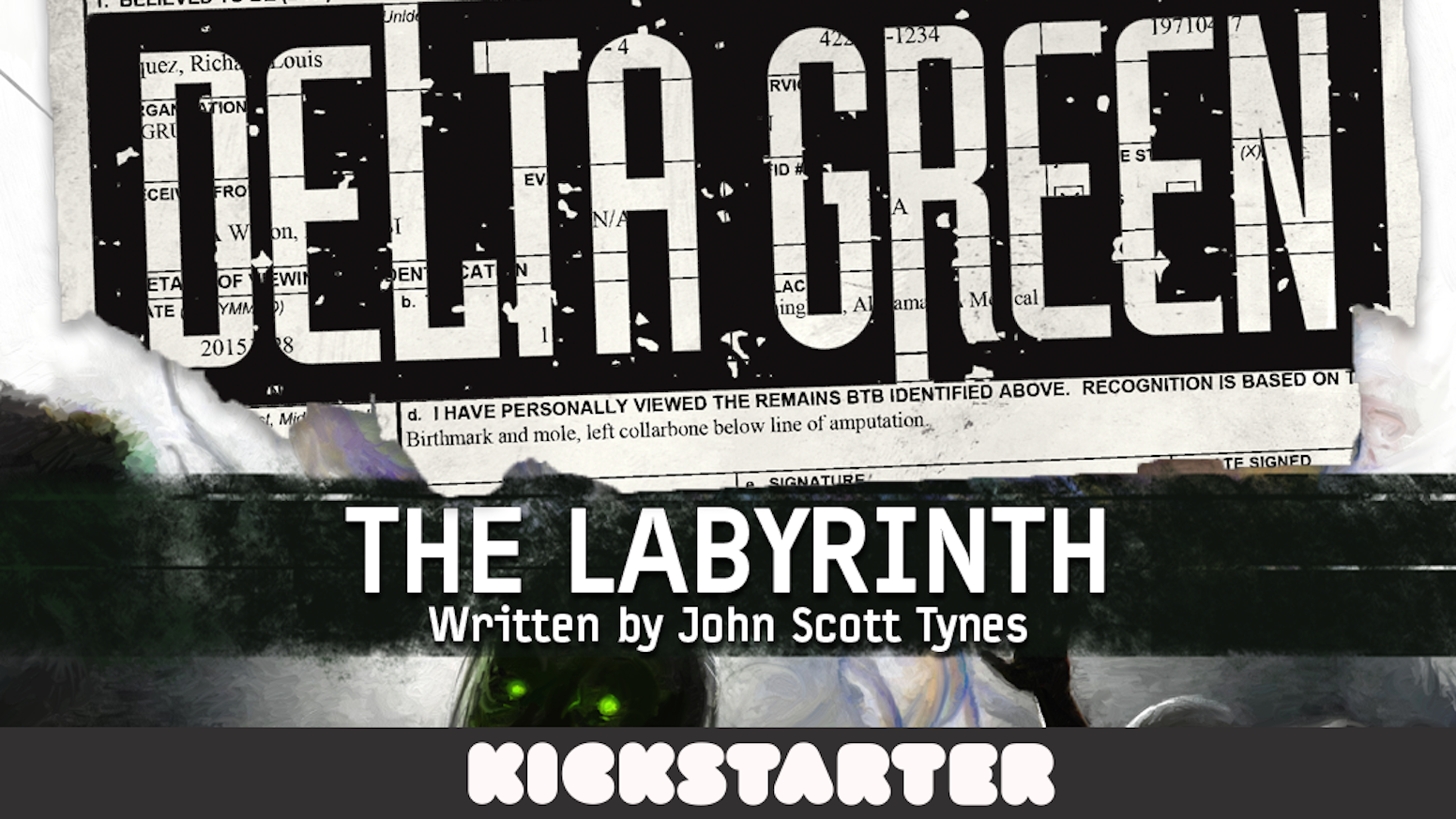 This review has aimed to shine an Elder Sign into the numerous different corners of the tabletop gaming world to unearth the 2018 releases which have some stated connection to Lovecraft’s vision or creations. There are – it seems – quite a lot of these. But after looking at all of these individual products and Kickstarters, are there any clear themes or observations to be drawn? I will give a few of my own thoughts, but equally I would be happy to hear what others can discern (use the comments section at the end of this post).

In the final analysis it’s fair to say that 2018 was another great year for Lovecraftian RPGs, providing further evidence that HPL’s influence is strong and insidiously clawing its way throughout the tabletop world. Here’s hoping that 2019 continues that wonderful, if horrifying, trend . . .