The month of October is synonymous with horror, especially in the gaming world (which seems to have taken Halloween and spread its evil taint across an entire 31 days).

To celebrate all things horrific, we’ve decided to offer our recently-released Dateline: Lovecraft core product at 20% off for the whole of October. If you’ve been tempted to pitch in to buy our newspaper but aren’t sure, maybe a few [[insert-local-currency-units]] off will make it appealing to you! Of course the awesome free add-on scenario by Jo Kreil is still … free :). 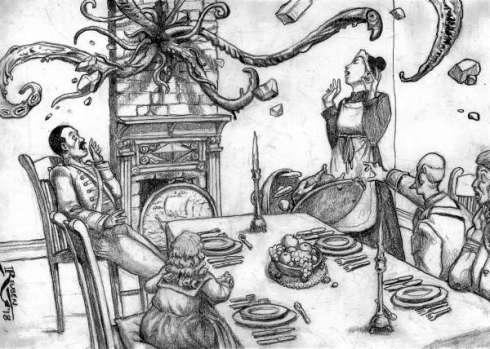 As mentioned previously, we are also putting the finishing touches on our next Convicts & Cthulhu “Ticket of Leave” supplement, featuring new artwork by the ever-horrific Reuben Dodd (see above). This will be our 13th C&C supplement, and we decided it would be neat to theme it to be about superstitions and folk magic in early Australia. Of course, not long after making that decision … mysterious and unexplained things kept happening … which have delayed the release of this supplement, which was originally due in late August!

And of course Spooky October is about much more than Cthulhu Reborn. We would strongly urge you to check out what other great gaming publishers are doing to celebrate gaming’s most fake-cobwebbiest of months. Over on the Sentinel Hill Press blog, plucky cemetery-explorer Bret Kramer has kicked off a series of Grave-themed articles called “Grave-tober”.

Something else that has excited us is Pelgrane Press’ imminent release of Hideous Creatures, a massive 352-page hardback book which revises and greatly expands Mythos creature writeups by Ken Hite previously only available as part of KWAS subscription bundles. The reason this forthcoming release is especially near and dear to us at Cthulhu Reborn is that the new book adds a treasure-trove of in-world “handout-style” documents relating to each of the nasties described in the book … and Pelgrane asked yours truly to design those pieces. That all adds up to 31 weird handwritten, typewritten, or newspaper-published pieces of 1930s goodness, collectively sprawling across about 50 pages of the book. On top of that I also did layout for this behemoth of a book, and designed the title logo you can see splashed in lurid green across the cover.

Pelgrane have just listed Hideous Creatures as available for pre-order on their website.

This entry was posted on Thursday, October 4th, 2018 at 7:09 am and posted in Convicts & Cthulhu, Dateline: Lovecraft, News & Updates. You can follow any responses to this entry through the RSS 2.0 feed.
« Dateline Starts Well!
Convicts Need Any Luck They Can Find »