German Reprint of “The Machine King”

Loyal readers of Cthulhu Reborn will doubtless already have grabbed a copy of Geoff Gillan’s “The Machine King,” the lavishly illustrated free PDF scenario we released last year. If you haven’t, you can grab one either from the Downloads page here or over on RPGNow.

“The Machine King” is far-and-away one of the most popular downloads from the site (and from RPGNow too). So it is only fitting that it becomes the first Cthulhu Reborn title to be republished for a non-English-speaking audience.

Some months back we were approached by the excellent and talented guys who publish Cthulhus Ruf, a sort of high-quality indie magazine dedicated to publishing original content for Call of Cthulhu. If you are a German-speaker and also play CoC you are probably already aware of this great publication (if not, you should macht schnell to their site and grab as many issues as are still in print!). 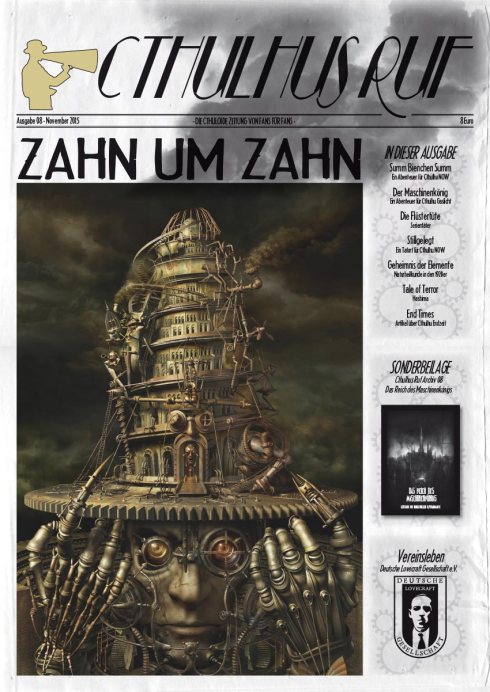 The translated version of Geoff’s scenario, called “Der Maschinenkonig” was recently published in Issue 8 of Cthulhus Ruf. I was lucky enough to obtain a print copy … and let me just say that the German designers have done a fantastic job!

It is sort of appropriate that “The Machine King” be translated into German, since many of the themes and images that are prominent in the scenario draw on things that are themselves German. Geoff’s scenio features significant nods to some great German literature and film (in particular Fritz Lang’s 1927 masterpiece “Metropolis”) and my own modest additions threw one or two more obscure references in as well.

Anyway … a great collaboration … we couldn’t be happier with the results.

This entry was posted on Friday, December 18th, 2015 at 4:47 am and posted in News & Updates. You can follow any responses to this entry through the RSS 2.0 feed.
« Back to Basics: Upgrades for “In The Shadows”
Welcome to a New Year of Horrors »

One response to “German Reprint of “The Machine King””