Unquestionably one of the most loved and enduring pieces ever written for Call of Cthulhu (or any Lovecraftian RPG) is the classic Masks of Nyarlathotep campaign. Despite the fact that it was written almost 30 years ago when the field was in its infancy it still tops most polls and was mentioned as a defining moment by pretty much every gaming luminary I interviewed for the State of the Tentacle series earlier this year.

About six years ago, a group of highly creative and talented folks hatched a plan over on the forums of Yog-sothoth.com. Their plan was to create a “Masks of Nyarlathotep Companion”, a book filled with source material, helpful hints and ideas, and all sorts of other stuff that would be helpful to a Keeper who was running this classic campaign. The project was headed up by Bret Kramer (WinstonP on the forum) but rapidly attracted a huge array of willing contributors.

Originally the plan was to release the Companion as a Chaosium monograph … but the book grew and grew and grew. And grew. Pretty soon it was obvious that this would be far beyond the normal monograph length. Since then lots of different methods of publication have been considered and many different road-blocks encountered. But the original team kept going and today their monumental efforts FINALLY bore fruit — not as a Chaosium book, or even as a book published by one of Chaosium’s licensees, but as a FREE resource released to the community. 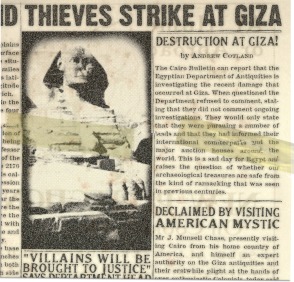 You can go to this page to download your own copy of the 572 page book. The current version is slightly pre-release still (in as much as the creative team is still busily editing the layout to incorporate voluminous copyreader notes) … but even in this form it is a beautiful piece of work and something that no Call of Cthulhu Keeper should be without.

I had a very small involvement with this project — quite late in its development I was approached to contribute quite a few handout designs to the Companion. The book includes several new scenarios (side adventures and a prequel) as well as significantly fleshing out one of the key clues from the original published campaign. I was priveleged to be able to contribute some of these newspaper articles, reports, but … most of all lots of hand-written notes. You can see some of my designs peppered through this post. Alternatively you can see ALL of them on this portfolio page.

I sincerely hope the Cthulhu gaming community enjoys and celebrates the free release of the Masks of Nyarlathotep Companion. But even moreso I hope everyone appreciates the enormous volume of work that has been put into this project by a staggering array of talented folks. It’s quite unbelievable that something so vast is being given away for free … and I strongly urge everyone whose game benefits from the work of these selfless many to consider somehow supporting their future works or indeed financially supporting Yog-Sothoth by way of a donation to keep the community going.

Now … go out and find out what happened to that Carlyle Expedition.

This entry was posted on Sunday, June 16th, 2013 at 10:56 pm and posted in News & Updates. You can follow any responses to this entry through the RSS 2.0 feed.
« Font of All Madness
State of the Tentacle: Sans-Detour »