Welcome to 2013 … here’s hoping this will be a great year for Lovecraftian roleplaying in general — there certainly seem to be a bunch of cool projects waiting in the wings to come out this year, so fingers crossed.

For my own small part, I have a few plans in store for 2013 as well. The first one I would like to announce is that I am hoping in the not-too-distant-future to release the first commercial PDF under the Cthulhu Reborn name. “What’s that?”, you say, “I thought this site was here to put out free stuff for everyone to download and use!” Well, yes, that’s mainly what it’s for (and I’ll certainly continue to use it in that way — with several free things currently well in to their latter phases of development). But I thought I would experiment a bit with creating a commercial product — not so much to make mega-bucks (here’s a hint: nobody producing Lovecraftian RPGs makes mega-bucks) — but rather to investigate other channels for distributing stuff. If you feel miffed, I’m sorry. 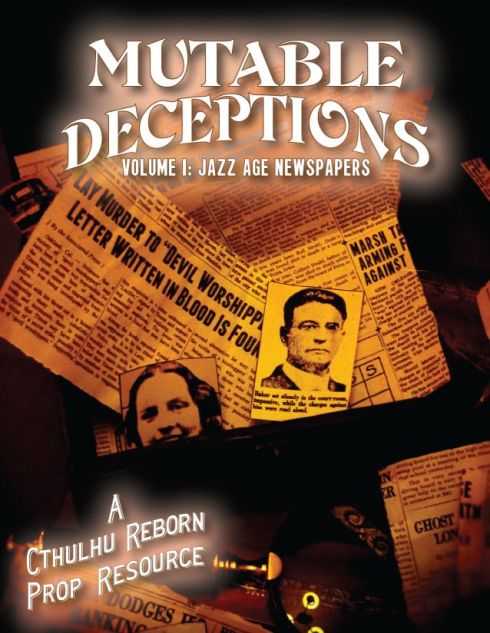 Anyway, the PDF that I’m planning to release for a modest fee later in the year is something I’ve been working on for a while. It’s a collection of PDF templates to ease the burden when it comes to creating prop newspaper clippings from the 1920s and 1930s. I’ve done a LOT of these for various people over the last couple of years (some are available here on the site as part of downloadable scenarios) — I’ve developed lots of little tips, techniques and templates that go a long way towards making news articles seem “realistic.” The idea of this product is to encapsulate as much of that expertise as possible, within the constraints of the PDF format,  into a pre-packaged product that you can use. The PDF template set will be called Mutable Deceptions.

Here’s a bit of a product blurb from the introduction of the PDF:

Period newspaper props and handouts are a much-treasured staple of most Investigative and Mystery roleplaying games, in particular Jazz Age horror games like Call of Cthulhu and Trail of Cthulhu. Players love the tactile thrill of receiving a well-crafted newspaper clipping, whether it be the clue which kicks off an investigation, the reward for hours of hard library research, or a piece of misdirection designed to send them off on a wild goose chase.

But making your own realistic-looking period newspaper clippings is not necessarily a quick and easy task. There are distinctive typographic styles, including font choice and layout conventions, which distinguish well-crafted period-authentic props from those which have been hastily-drafted using modern word processing software. And, in keeping with high standards of realism set by commercial products, such handouts should also incorporate evocative graphics in the form of realistic photographs or advertisements appearing on the reverse-side of the page.

So, what’s a Gamemaster/Keeper/Dungeon Master to do in situations where he or she wants to create an authentic-looking newspaper prop for a new scenario?,Or for a published scenario which lacks good-quality handouts? Or maybe a quick newspaper report mid-adventure recording the consequences of actions taken by the players? Or which leads them off on a tangent of their own devising? 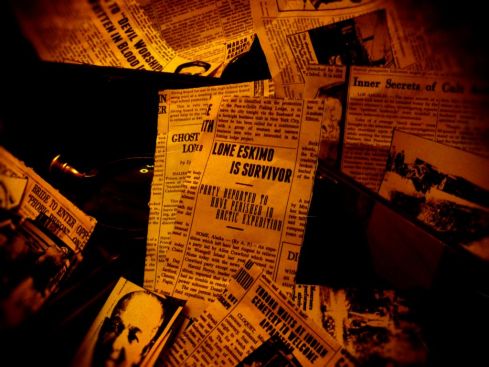 Mutable Deceptions, Volume 1 aims to make the process of creating realistic-looking newspaper props from 1920s and 1930s quick and easy. It does this by providing a selection of article templates, each a fillable PDF form. Included in this package are fourteen templates of varying shapes and sizes which can be effortlessly customised to create an endless array of 1920s/1930s-authentic props. Bring your own text, or manipulate the bizarre real-world stories already pre-filled into the forms.

As a bonus, a sampling of 1920s photos are provided for you to use as you like to embellish your handouts with just the right type of blurry, grainy illustration.

Baffle your players. Have them chasing shadows. It doesn’t get any easier than this.

Dispensing with the marketing-speak and atmospheric lighting … what the heck will this package look like? Well, it will be a collection of three PDFs — one being an instruction booklet, one being a 20 page booklet of templates in black & white, and the third being the same templates but with a faux aged paper texture rendered under the text you type. Rather than just giving you blank templates, I have scoured a bunch of old newspapers to find enough weird and wonderful articles — each of which seems like it could have been part of a Cthulhuoid investigation — and pre-filled them into the forms so you can see what the finished product might look like. So, when you open up the templates file in Acrobat Reader, it looks a bit like this: 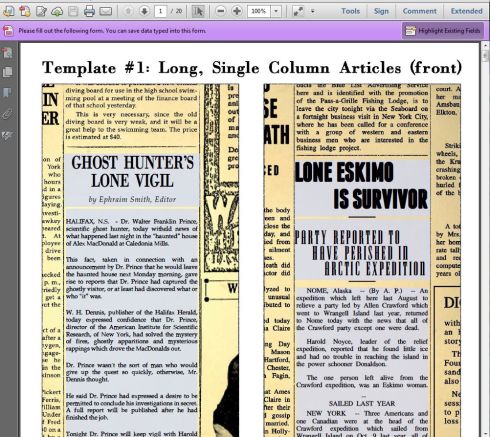 Obviously you can delete the text that’s in these fields .. or if you love the story, tweak it to become part of your game. You can even apply some formatting to the article bodies (e.g., centre some lines as shown in the right hand example above, selectively set font sizes, tweak line and paragraph spacing to fit what you need into the space provided). Once you’re happy with the prop, you can just print the page of the template you’ve tweaked — along with the corresponding reverse side — and your prop is done. Alternatively you can save your filled-in form for later work. Make dozens of variant saved PDFs if you like.

So, when is this going to be available and how much will it cost? … well, the templates are all done (you can see printed versions of many of them in the montage photos above). These represent the output of weeks and weeks of typesetting and research. I still need to do some testing of the PDF forms on different platforms (Acrobat Reader is a great piece of software, but using the more advanced features of the PDF format can get a bit hairy). And I still need to knock together the instruction booklet, though the text and pictures already exist. In a perfect world, none of this should take too long … As to cost, I still haven’t decided — it’s not going to be super-expensive, though.

BTW: in case it’s not blindingly obvious — there’s nothing in the Mutable Deceptions product that is linked to any specific RPG game system. It’s just a set of prop templates. You can use them equally well for a Lovecraftian tabletop game … or for your next Gangster-era LARP … a d20 game set during the Great Depression … or any other non-commercial purpose you can think of. The basic product license won’t cover commercial uses of the templates, though — so if you’re James Cameron and want to use these for props in your next movie (Titanic 2: Titanic-er?) — well, you should get in touch … 🙂

One response to “Coming in 2013: First Commercial Prop Resource”